Kaymer ties course record with a 63 and leads at Sawgrass 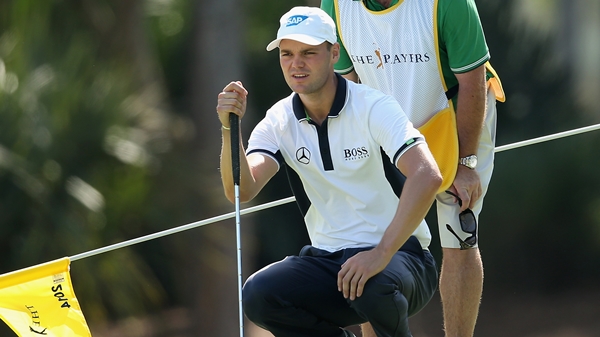 Kaymer missed only two fairways. He putted for birdie on all but one hole. And the former PGA champion finished with four straight birdies to become only the fourth player to shoot 9-under 63 on the Stadium Course at the TPC Sawgrass, giving him a two-shot lead over Russell Henley.

There were 28 rounds in the 60s, which made the score by Adam Scott look even worse. With another chance – his best one yet – to get to No. 1 in the world for the first time, Scott finished with a pair of double bogeys from shots in the water and signed for a 77. It was his highest opening round at The Players since his first trip in 2002.

Kaymer was flawless, hitting whatever shot he felt he needed. His final blow was a hybrid that ran through the ninth green and into a bunker, leaving a simple up-and-down for birdie. He had a 29 on the back, the first player in the 32-year history at Sawgrass to break 30 on either nine.

Roberto Castro also opened with a 63 last year. The only others with 63 were Greg Norman in the first round in 1994, and Fred Couples in the third round in 1992.

“It’s just a nice bonus,” Kaymer said. “It’s only the first round of a long, long tournament. It’s nice to make some history. No one shot 29 on that golf course before.”

Kaymer would not have seemed like a good candidate.

He has not won since the HSBC Champions in Shanghai at the end of 2011. He hasn’t had a top 10 all year. But the 29-year-old German has felt his swing start to come together in recent weeks. His name has been featured on leaderboards more and more.

And he had a simple explanation.

“I stopped thinking,” Kaymer said, a former world No. 1. “I thought a lot the last two years about swing changes … that every shot I made I reflect on it, what I did wrong, what I did right.”

A few weeks before the Masters, he spent time with longtime swing coach Gunter Kessler in Phoenix, and then they had another good session in Germany.

“And then it just clicked a little bit,” he said. “I thought, `OK, I know I can hit pretty much every shot when I needed to hit it.’ If it’s a draw, if it’s a fade, low or high, I know that I can do it. It’s just a matter of getting the confidence on the golf course and then letting it happen and really doing it.”

Henley, who won the Honda Classic in a four-way playoff in March, made birdie on half of his holes to atone for one big mistake. He hooked a tee shot into the water on No. 7 and compounded that with a three-putt for double bogey. But he answered with six birdies on the back nine for a 65.

“I knew I was playing well and felt really comfortable on the greens,” Henley said. “But it was one of those back nines where you get to 18 and I just realized that I had a putt for 7 under. So that was pretty cool.”

The group at 67 included Sergio Garcia, who spent last year in a war or words with Tiger Woods that lasted right up until the Spaniard hit three balls into the water on the two closing holes and Woods walked away with the win. Garcia looked sharp, happy and was confident in his game.

And he had loads of company. Lee Westwood, 20-year-old Jordan Spieth and U.S. Open champion Justin Rose also were at 67. The group at 68 included Ernie Els and Dustin Johnson. There were 67 rounds under par, and the scoring average of 71.99 was the eighth-lowest for an opening round at The Players Championship.

But it wasn’t easy for everyone.

Rory McIlroy made three bogeys over his last seven holes and tumbled to a 70. That was nearly as bad as Phil Mickelson. Coming off a 76 in the final round at Quail Hollow last week, he started his round by missing a 3-foot par putt and shot 75.

Of the four players with a mathematical chance to reach No. 1, only Masters champion Bubba Watson broke 70. He had a 69, while Henrik Stenson and Matt Kuchar each had a 71. Only four players had a worse score than Scott.

Kaymer reached No. 1 three years ago, and then sought to change his swing because he could only hit a fade. He prefers to play by feel, not by mechanics. A swing change left him little choice but to think too much. Now, he can only hope it’s as simple as see the shot and hit the ball.