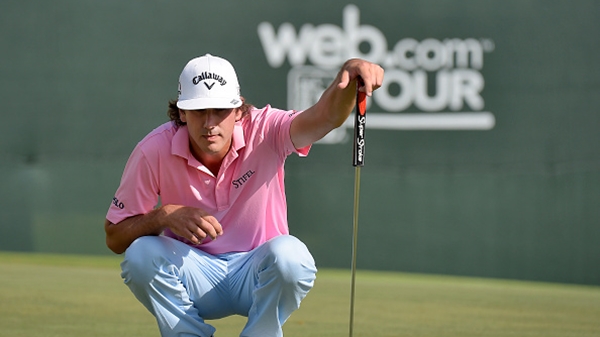 BROUSSARD, La. – Kelly Kraft won the Louisiana Open on Sunday for his first Web.com Tour title, closing with a 6-under 65 in windy conditions for a one-stroke victory at Le Triomphe.

“It’s been a while. It feels good to win again,” Kraft said. “The back nine is harder and everyone seems to back up. After nine holes, I thought if I can post a number it may work out. Toward the end I was just trying to make birdies.”

Six strokes behind Rick Cochran III at the start of the round, Kraft birdied Nos. 15-17 and finished with a par on the par-4 18th after missing a 6-foot birdie putt.

“I hit a good putt,” he said. “It just went a little more left than I thought it would. I thought I needed to make that to get into a playoff, but I got lucky and am happy to win it outright.”

South Korea’s D.H. Lee and Australia’s Rhein Gibson tied for second. Lee birdied for the final two holes for a 63. Gibson bogeyed Nos. 13 and 14 and closed with four straight pars for a 71. He missed a 15-foot birdie putt on 18.

“I knew what I had to do coming in,” Gibson said. “I had some chances and didn’t convert. I fell in love with the line and I just forgot to hit it.”

Cochran closed with a 73 to tie for fourth at 12 under.

Kraft was making his 50th start on the tour.

“I’ve played with too much expectation since I turned pro,” Kraft said. “I’ve started out the last couple of years with high expectations because I had a good amateur career and I thought I was better than I was. I’ve been working with a new coach and he’s helped me remember what it to just play golf again and have fun, rather than getting so caught up in the mechanics.”