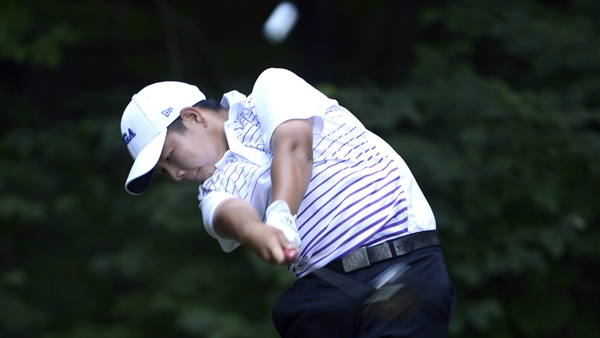 Excitement mounted in the third round when 12-year-old Lim and Raphaël Lapierre-Messier, 17, of St-Jean-Sur-Richelieu, Qué. battled for first place in a sudden death playoff. Lim was the eventual champion, making a birdie on the first playoff hole, to finish with 1-over-par 217 after rounds of 70-74-73. This win earns Lim an exemption into the Canadian Junior Boys Championship taking place at the end of July at Legends on the Niagara in Niagara Falls, Ont.

“It feels great to get the exemption,” said Lim after Thursday’s win. “I’m only twelve years old, so it’s exciting to be able to compete in that championship.”

Third place was shared by 16-year-old Brendon Lacasse of Châteauguay, Qué. and Brandon Seys of Port Lambton, Ont. The pair finished the championship at 5-over-par 221.

In the Junior Girls division, 17-year old Getty maintained a steady lead over her competitors during the three rounds of play, shooting an even-par 72 in Thursday’s final round for a final score of 5-over-221. Her nearest competitor, 13-year old Céleste Dao of Notre-Dame Ile-Perrot, Qué. finished 11 strokes behind with a final score of 16-over-232. Third place was claimed by Diana McDonald, 16, of Kingston, Ont. who carded a final round 78 to finish at 20-over-par 236. With this win, Getty will compete in the Canadian Junior Girls Championship at the end of the month at Thornhill Golf and Country Club in Thornhill, Ont.

“The wind was pretty strong yesterday, and I noticed that there’s a lot of wind on this course in general,” said Getty. “The fairways are really narrow, so that was the hardest part. But I’m super excited to win this tournament and get the exemption.”

Notable highlights from this week’s tournament include hole-in-ones by Gabriel Gingras, 17, of Chelsea, Qué. and Emilie Tyndall, 17, of Kirkland, Qué. Gingras aced the 145-yard eighth hole in the first round, while Tyndall fired an ace in the second round on the 160-yard Hole No. 13.