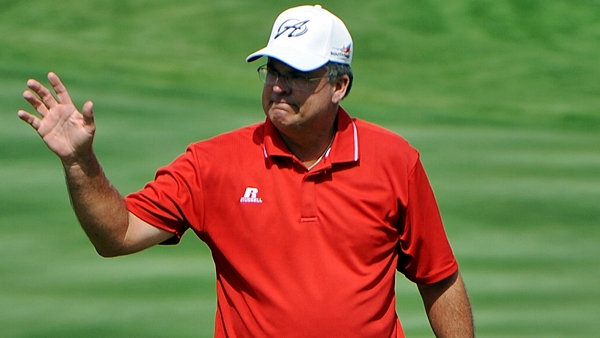 BLAINE, Minn. – Kenny Perry eagled the last hole after waiting out a thunderstorm to take a one-shot lead Saturday after the second round of the Champions Tour’s 3M Championship.

The six-time senior winner birdied the par-3 17th and was on the green on the par-5 18th when play was stopped for the thunderstorm. After a two-hour delay, he made the 8-foot eagle putt.

First-round leader Marco Dawson was second after a 66.

Bernhard Langer, Gary Hallberg, Jeff Maggert and Gene Sauers were 13 under. Langer, coming off a record-breaking victory in the Senior British Open, and Maggert shot 67, and Hallberg and Sauers had 65s.

Dawson and Maggert were in the 18th fairway when play stopped. When play resumed, Dawson put a 5-iron pin high to set up an eagle, but Maggert – tied for the lead at the time – hit his approach shot in the water en route to a bogey.

Two shots back to start the day, Perry was 3 under on the front nine and added birdies at Nos. 10 and 15 to pull into a tie for the lead.

Fifth in the season-long points race, Perry has been one of the more consistent tour players, finishing no worse than 14th – including four top-10s – in his last six events. That includes a major win May 18 at the Regions Tradition.

Maggert, who started the day one shot back, bogeyed the first hole to fall to 7 under, before birdies on Nos. 3 and 4. Starting on No. 7, he birdied five of six holes to take a two-shot lead at 14 under, but promptly gave a shot back with a bogey on the par-4 14th.

Dawson tied for the lead with a birdie on the 318-yard par-4 seventh after he drove the green and two-putted. However, he didn’t get another birdie until No. 16.

Langer, who won the event in 2009 and 2012 and took the Senior British Open by a tour-record 13 strokes last week, was 3 under on the front, but had just two birdies on the back nine.

Canada’s Rod Spittle is tied for 16th after carding a 5-under 67 on Saturday.