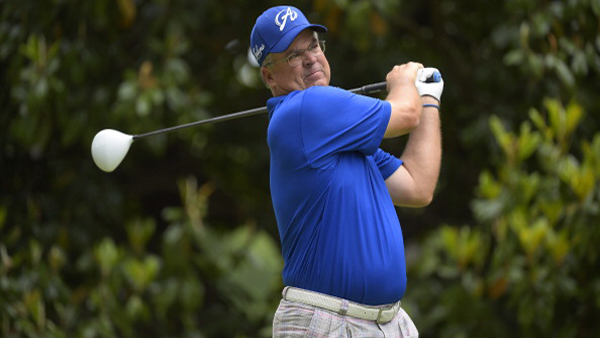 BIRMINGHAM, Ala. – Kenny Perry won his third Champions Tour major in the past year with a one-stroke victory over Mark Calcavecchia on Sunday in the Regions Tradition.

Perry closed with an even-par 72 at Shoal Creek to finish at 7-under 281, while other contenders had up-and-down days and John Cook lost the lead with a double hit.

Perry bogeyed No. 15 but retook the lead with a birdie on the next hole and lined up an easy par putt on the closing hole.

Calcavecchia finished with a 70. Two-time winner Tom Lehman closed with a 67 to tie Jay Haas at 5 under. Haas closed with a 71. Cook’s closing 72 put him three strokes back.

Perry got his sixth victory and became the second player to win in three consecutive Champions Tour major starts, joining Gary Player, who did it in 1987-88.

It was the highest score for a Tradition winner.

Fred Couples was disqualified Sunday after missing his tee time. He was 9 over after a 73 Saturday, his best round. Couples also withdrew from the Senior PGA next week at Harbor Shores in Benton Harbor, Michigan.

Cook’s double bogey on No. 14 cost him the lead.

Cook’s ball was buried deep in the right bunker just under the lip, and appeared to ricochet backward before winding up a couple of feet out of the sand.

Tour officials reviewed the bunker shot using phone video shot by an event staffer and determined that Cook hit it again on his back swing.

“Golf Channel didn’t have a great view of it but there was someone with the event who was shooting social media video of it that had a face-on angle, and it was clear that he double hit it,” said Brian Claar, the Champions Tour’s vice president for competition.

Cook declined a chance to review it himself and said he hadn’t been sure what happened.

“That was bizarre,” he said. “I told Todd, my caddie, `You better move that bag because if this ball hits the lip it could go anywhere.’ And that’s what I thought it did. I didn’t hear anything. All I felt was my club hitting the lip of the bunker and then the sand catching the club.

“Evidently in all that, it hit my club head. I’m good with that. If it shows on TV, I can honestly say I didn’t feel anything but I don’t want to take something that wasn’t there.”

Cook returned a couple of weeks ago after a 10-week layoff because of a fractured rib in his back.

“If someone would have said that I’d have a one-shot lead with five to play this week, I’d have said, `You’re nuts,'” he said.

Calcavecchia had another near-miss at Shoal Creek. He had bogeys on Nos. 9 and 13 after missing short putts, and said he missed five during the week of 3 feet or less.

“I’ve never won a tournament doing that and I don’t think anybody has,” Calcavecchia said

He led after 36 and 54 holes at Shoal Creek in 2011 before a final-round 75 cost him a lead that had ballooned as high as six strokes.

Calcavecchia was plagued by nagging rib problems that pained him after swings.

“I was hurting all day,” he said, adding that he wasn’t sure if he’d play in the Senior PGA.