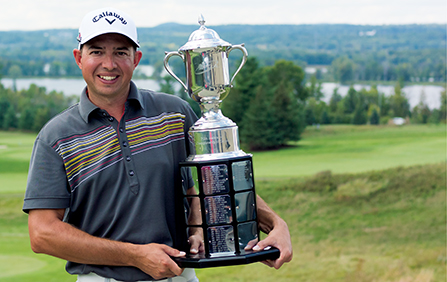 “It’s really unbelievable to have won this national championship because I know all the great names who have won and have their names on the trophy,” Kerfoot said. “This is something that I’ll graciously accept and cherish for a long time.”

Kerfoot, who started the day two shots back of Bussieres put together a gutsy final round 4-under-par 68, which featured six birdies.

“I had a really good game plan all week and tried to play to my strengths which is hitting fairways and greens,” Kerfoot said. “But at the end of the day, I’m really just a grinder and I’m proud of that.”

Nicolas Fortin of Academie de golf Levis finished fourth at 7 under, while Laval Sur Le Lac’s Jean-Hubert Trahan rounded out the top five at 3 under for the week.

The next PGA of Canada national championship takes place Oct. 26-29 at the Mid Ocean Club in Bermuda for the Nike Golf PGA Team Championship of Canada.