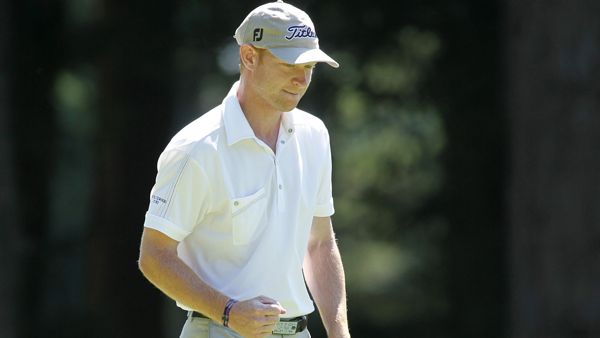 Kevin Carrigan opened up his title defence at the Canadian Mid-Amateur Championship by firing a 8-under 63 on Tuesday at Blackhawk Golf Club.

The Victoria native carded three eagles and a closing nine 29 to set a new competitive course record at Blackhawk, after opening the day with an unplayable on the par-4 10th. Carrigan quickly rebounded with a birdie on the par-5 11th and rolled in his first eagle of the day on the par-5 15th hole.

“I took an unplayable on my first hole, didn’t seem like much of a round until I guess I made the second eagle, 3-under to 5-under I was hitting it well,” Carrigan said.

As the reigning Canadian Mid-Amateur champion, Carrigan lit up Blackhawk’s par-5’s playing them in 7-under par with three eagles on a windy afternoon.

“If you’re hitting it good, it doesn’t feel windy,” he continued. “I mis-clubbed a couple of times but never got myself into trouble, I didn’t really miss many shots.”

California’s David Bartman, trails Carrigan by four strokes after an opening round 4-under 67. Bartman’s round was highlighted by an eagle on the par-5 4th hole and leaves him three strokes ahead of Raymond Oh of Richmond, Ont., in the race for the Mid-Master (40+) title.

“I just kept it in play and took advantage of the par-5’s,” Bartman said. “If I did miss a green, my short game was solid.”

Michael Rutgers of Windsor, Ont., sits in solo third after a 3-under 68, while Calgary’s Dustin Yeager opened with a 2-under 69 to grab a share of fourth place. Chris Moore of Vancouver and Oh currently sit in a tie for fifth at 1-under.

Saskatchewan’s Kris Carley recorded the shot of the day after holing a 255-yard hybrid on the par-5 7th hole for an albatross. The albatross was his second of the season and third double-eagle of his career.