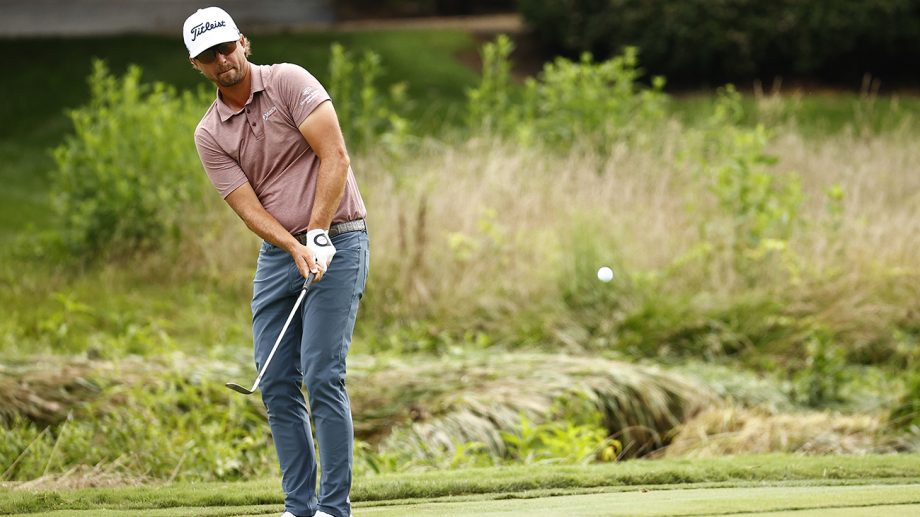 GREENSBORO, NORTH CAROLINA - AUGUST 15: Roger Sloan of Canada chips to the seventh green during the final round of the Wyndham Championship at Sedgefield Country Club on August 15, 2021 in Greensboro, North Carolina. (Photo by Jared C. Tilton/Getty Images)
Associated Press

GREENSBORO, N.C. (AP) – Kevin Kisner made birdie on the second extra hole to win a record-tying six-man playoff at the Wyndham Championship on Sunday.

Kisner struck his approach to 3 feet on the 18th hole at Sedgefield and made the putt for his first PGA Tour win since 2019 and fourth of his career.

Not that it was easy. Kisner began four shots off the lead and shot 66, making birdies on the 16th and 17th holes to reach 15 under and the playoff. His birdie bested Adam Scott, Roger Sloan, Kevin Na, Si Woo Kim and Branden Grace after all had made pars on the first additional hole.

With Scott looking at a 4-footer for birdie on the first extra hole, Kisner thought he would have to hole a pitch from short of the 18th green just to stay in the playoff, and he nearly did it. Kisner grimaced as his ball settled just right of the cup.

But Scott’s short putt missed badly and all six players went back to the 18th tee. This time, only Kisner stuffed his approach close on the 505-yard closing hole.

It was the third six-man playoff on the PGA Tour and the first since Robert Allenby won at Riviera in 2001.

It didn’t look like a playoff would be necessary after Russell Henley, who led after the first three rounds, recovered from a slow start to reach 17-under after a birdie on the 10th hole. But Henley bogeyed three of the next four and came to the 72nd hole needing par to stay at 15 under.

But Henley missed a 6-footer to go 0-for-3 this season with the 54-hole lead. He was in front after three rounds at Las Vegas last October and at the U.S. Open in June.

There was drama through the final round of the tour’s last regular-season event as players outside the postseason sought to get in.

It looked like former FedEx Cup champion Justin Rose, who started the week 138th, had done enough to make the 125-man field for The Northern Trust. But the Englishman missed a 5-footer for par on the final hole that dropped him to 126th – first outside the playoff field.

Rose’s loss was Chesson Hadley’s gain. The veteran who finished second at the Palmetto Championship at Congaree in June made a hole-in one on the par-3 16th – complete with an awkward, leg-kicking celebration – and shot 62.

That was enough to sneak him into next week’s field at No. 125. And unlike Rose, Hadley needed to make the playoffs to secure full playing privileges for next season.

Sloan and Scott Piercy were two others who played their way into the playoffs. Canada’s Sloan moved from 131st to 92nd while Piercy came in at No. 126 and improved 10 spots.

Three players who missed the cut this week fell from the top 125 after starting the week playoff-bound. Ryan Armour went from 122nd to 127th, Bo Hoag from 125th to 129th and Patrick Rodgers from 123rd to 128th.

Threatening weather for later Sunday led tour officials to move up tee times. They didn’t count on a mash-up at the top leading to the 12th playoff on the PGA Tour this season.