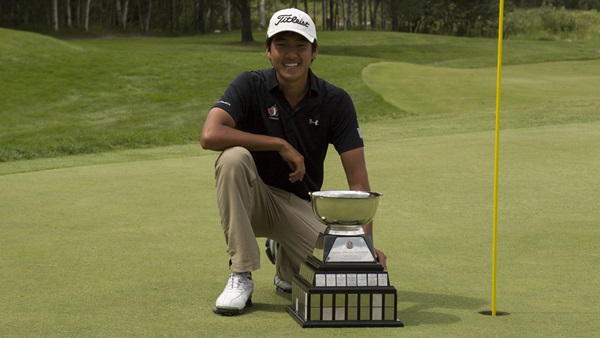 Kevin Kwon, 18, of Pitt Meadows, B.C. has won the 2013 Canadian Junior Boys Championship at Timberwolf Golf Club in Sudbury, Ont. Kwon led from wire-to-wire and never looked back after his opening tee shot on Tuesday.

“It feels great,” said Kwon following his victory. “I was really nervous today but I tried to do the same thing I did the past few days and I found a way to win.”

“There was a lot of pressure with this being my third and final Canadian Junior,” Kwon continued. “The first one I had zero expectations, but with this one there were more expectations because I wanted to end my career well. Two different kinds of happy.”

Kwon will compete next week in the 2013 Canadian Men’s Amateur Championship, which will be conducted August 6 – 9 at Royal Colwood Golf Club and George Vale Golf Club in Victoria, B.C.

Kwon’s Development Squad teammate Matthew Scobie, 18, of Ajax, Ont., finished in second place five strokes behind Kwon at 7-under 281 after shooting 2-under 70 on Friday – Scobie and Kwon were paired together for the final two rounds.

Harrison took home the Juvenile Boys Division Title by three strokes over Curtis Chan, 16, of Richmond, B.C., and Étienne Papineau, 16, of Bromont, Que., who both finished at 2-under 286.

Final round results and a full field list are available online.