Kevin Kwon and Dale Jackson pick up Sport BC Awards 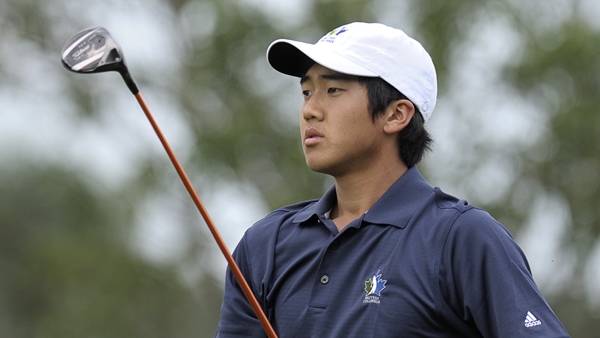 Vancouver –Kevin Kwon of Maple Ridge, B.C. and Dale Jackson of Victoria, B.C. were honoured at the Sport BC Athlete of the Year Awards banquet hosted at the Fairmont Hotel Vancouver.

Kwon, a Team Canada Development Squad member and freshman on the University of Washington Husky Men’s Golf Team, was named B.C.’s Junior  Boy’s Athlete of the Year award thanks to his stellar 2013 campaign on the provincial, national and international golf circuit.

Kwon cleaned up at the Canadian Summer Games, taking home both individual and team gold medals. He also won the CN Future Links Pacific Championship and was crowned the Canadian Junior Boy’s Champion.

Dale Jackson was named B.C.’s Official of the Year. The Victoria native is decorated provincial, national and international rules official, who is also the acting Golf Canada Rules Chair.

Jackson has been an active member on the Joint Rules of Golf Committee with the R&A and USGA. He was active in the decision on the ban of anchored putters in 2013.

Jackson, a member of Royal Colwood Golf Club, acted as a rules official at all four professional major championships in 2013. He was also rules chair for the 2013 Canadian Men’s Amateur Championship which was co-hosted by Royal Colwood and Gorge Vale Golf Clubs.

Ryan Borg talks about his transition to NCAA collegiate golf

By: Namish Modi- The Toronto Observer

Ryan Borg’s decision to pack up and move to Orlando has proven to be a good one.

The Brampton, Ont. native and University of South Florida (USF) golfer made the decision to leave Canada and Robert J Hall high school to pursue his dreams.

“Going to Florida was definitely for more recognition,” said Borg, following his 5-under-par 67 second round at the USF Invitational earlier this week at the Lake Jovita Golf and Country Club in Dade City, Fla. “I wouldn’t be where I am today without doing what I did in Grade 12.”

Midway through his round at Lake Jovita, an eagle on the 11th hole was a sign of his improvement and gradual rise in his potential.

“He’s just a good all-around golfer, his upside is great,” said USF coach Chris Malloy. “He does everything very well. We knew he certainly had this potential in him.”

On the final day of the tournament Borg struggled, closing with a 5-over-par 77 to finish the tournament at a 1-over-par 217 to tie for 44th.  His USF squad finished at 31-under to earn second place in the tournament behind Florida State University.

“I was able to accommodate only going to school said amount of hours a week, and doing work from home, so I could golf and work out,” Borg said. “Living on my own last year I would say was harder, I had to cook and clean for myself.”

Borg had to display maturity beyond his years living in his own apartment and figuring out things on his own at the tender age of 17.

“My parents definitely missed me and I missed them, but it was the right decision,” he continued.

As a communications major, Borg had multiple offers for schools, but settled for USF even though when he first visited the school, there were no open spots.

“I remember being so nervous, I couldn’t even talk,” Borg said.

There was an adjustment period for the college freshman when he started his NCAA career, shooting a 10-over-par in the Rees Jones Collegiate Tournament in September, and 6-over in the Brickyard Collegiate Championship in October.

However, his steady improvement has been evident as he finished with a 1-under at the Bayou City Collegiate Championship in February to tie for 21st place.