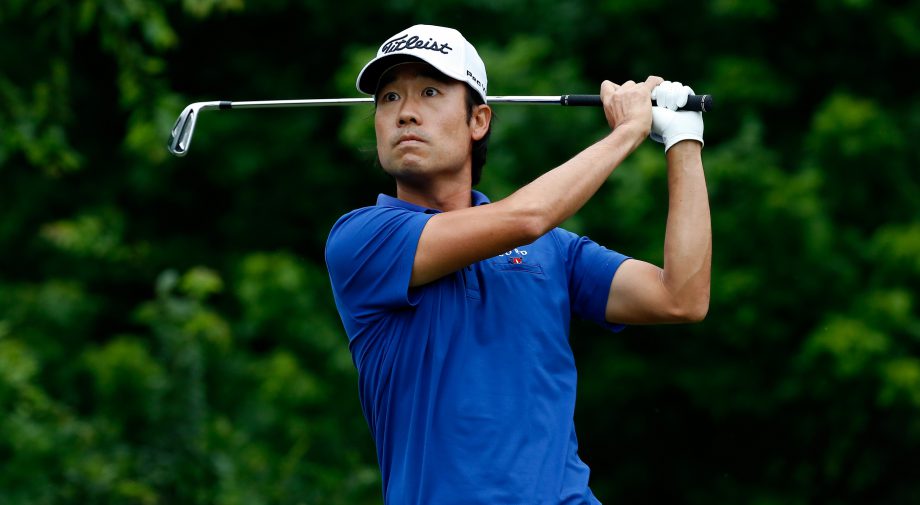 FORT WORTH, Texas – Kevin Na had gone 26 holes without a bogey at Colonial before his last tee shot Friday was swept away by flowing water after going into a rain-swollen drainage culvert.

Not even that could dampen Na’s second round that gave him the lead halfway through the soggy tournament.

Na took the penalty drop near the 17th fairway, and hit a blind approach shot over bleachers to the back side of the 18th green. His two-putt from 20 feet wrapped up a 4-under 66.

Na also made some long birdie putts. His 30-footer off the fringe at No. 14 came right after rolling in a 22-footer at the 13th, where he broke into a dance for the rowdy fans surrounding the par 3 situated on the edge of Hogan’s Alley.

“I want to call it the Big Bird dance. … It just came out. I wasn’t really thinking about it,” the 31-year-old Na said. “You know, the crowd has been very supportive. I felt like I was from Texas.”

Masters champion Jordan Spieth, a real Texan, was alone in the lead without a bogey before losing four strokes in a two-hole span.

Spieth finished with a 73, nine strokes worse than his opening round 64 that had him in a four-way tie on top. He dropped seven strokes back at 3 under, in a crowded tie for 15th place.

“I had a goal in mind, and it was a higher score than (Thursday) given the conditions,” said Spieth, the 21-year-old Dallas player playing consecutive weeks at home in North Texas. “I wanted to no blemishes, and then we held that late through 12 holes.”

There were periods of steady rain for the morning groups, but no delays. That was after Thursday’s first round started three hours late following more than an inch of rain fell overnight.

With more inclement weather expected Saturday, including the possibility of severe storms in the afternoon, players in the third round will be grouped in threesomes instead of the normal twosomes and go off both tees Nos. 1 and 10.

The lead group of Na, Poulter and Weekley was scheduled to tee off around 9 a.m. Saturday, more than 3 1/2 hours earlier than usual for the leaders’ group at Colonial.

Heavy rain also was in the forecast Sunday.

Poulter, playing his first Colonial since 2010, had bogeys on his first and last holes Friday. His only bogey Thursday came on his last hole, costing him a share of the first-round lead.

A half-inch adjustment in his putting grip has paid off at Colonial, with only 25 putts in each of the first two rounds.

When going through boxes of pictures to find some to put on the wall in a new guest house he is building, Poulter came across one when he noticed the forefinger of his left hand was in a different spot. He first adjusted during the pro-am round Wednesday.

“It felt pretty good, and obviously it was pretty good (Thursday) and it’s continued,” he said. “It’s angled further down toward the shot. So it’s almost more parallel to the shot. … It’s probably only a position of half an inch difference to what it was, but sometimes half an inch makes a big difference on a feel.”

About the same time that Poulter rolled in a 14-foot birdie putt at No. 6 to get to 8 under, Spieth was making a bogey two holes back after he missed the green at the challenging par-3 fourth and didn’t make a 6-foot par- saver to drop to 7 under.

Spieth followed with a triple bogey at No. 5, taking a drop in the rough after hitting his tee shot way right into a hazard adjacent to the Trinity River. His approach rattled around in the upper branches of a tree before dropping about 75 yards short of the green.

With a steady rain falling, Spieth then missed a 4-foot birdie try at No. 6 and bogeyed the par-3 eighth from a greenside bunker.

“That’s kind of unlike me. It’s not something I do, compound mistakes,” he said. “I had chances to bounce back there, and wasn’t able to do it.”

Three Canadians sat within the top-25 heading into weekend action in Fort Worth. Adam Hadwin (66) was tied for 6th, Nick Taylor (68) had a share of 11th, and Graham Delaet (68) was in a logjam of players who were tied for 25th.