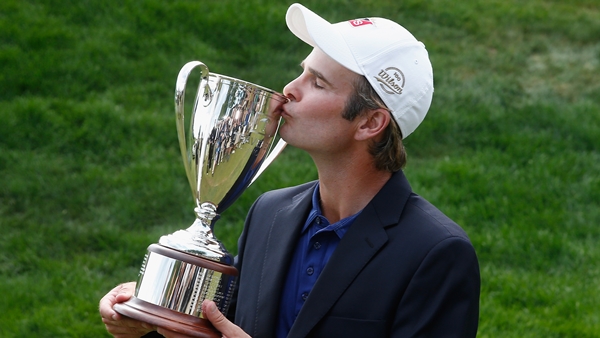 Streelman shot his second straight 6-under 64 to finish at 15-under 265. He broke the tour record for consecutive closing birdies by a winner of six set by Mike Souchak in the 1956 St. Paul Open.

The 35-year-old Streelman also won the Tampa Bay Championship last season. He missed the cuts in his previous four starts on tour.

“I didn’t have too many expectations coming here,” Streelman said.

Sergio Garcia and K.J. Choi tied for second. They each shot 67.

Aaron Baddeley was fourth at 13 under after a 69.

Streelman was 1 over for the day before starting the birdie run on No. 12. The streak reached five with a 37-foot putt at No. 16, and he capped it by hitting a wedge to 9 feet and rolling in another putt at No. 18.

“I was thinking about her (Sophie) on those last couple of putts. I was thinking, `You know what? If these go in, great. If not, great. She’s going to love me either way and we have a nice family vacation coming up either way,'” Streelman said.

Garcia has six top-10 finishes in 10 PGA Tour starts this season, and won the European Tour’s Qatar Masters in January.

“At the end of the day he played really, really well,” Garcia said about Streelman. “I feel like I played quite nicely and it just wasn’t my time.”

For the sixth straight year at the Travelers the player who held the 54-hole lead was unable to win. Ryan Moore was one stroke ahead after three rounds, but closed with a 71 to tie for fifth at 12 under.

Second-round leader Scott Langley birdied his first three holes and briefly pulled into the lead at 14 under. He, too, finished with a 71 to tie for 11th at 10 under.

Miguel Angel Carballo became the second player to make three eagles in a round on the PGA Tour this season as part of a 63 early Saturday. He finished at 9 under.

Patrick Rodgers, the former Stanford star making his pro debut, shot a 70 to tie for 46th at 4 under.

Ken Duke, the winner last year, had a 68 to also finish at 4 under.