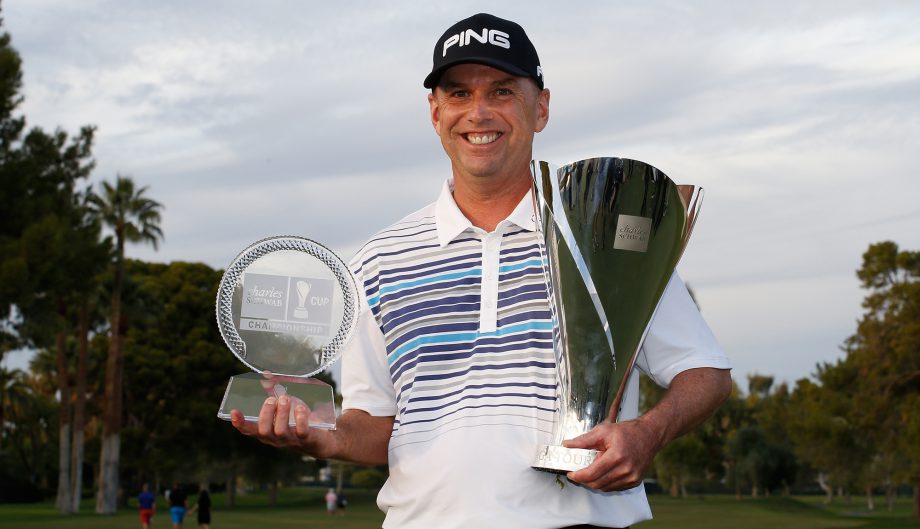 PHOENIX – Kevin Sutherland finally broke through on the PGA Tour Champions, taking the season-ending Charles Schwab Cup Championship – and the topping the yearlong competition, too.

Sutherland closed a 5-under 66 on Sunday for a one-stroke victory over Vijay Singh at Phoenix Country Club, the tree-lined course hosting its first tour event since the Phoenix Open left for TPC Scottsdale in 1988.

Bernhard Langer, the winner of the first two playoff events, had a 64 to tie for 12th – five strokes back. Langer slipped to second in the season standings, missing a chance to win the title for the fourth straight year and fifth overall.

The 53-year-old Sutherland won for the first time in 78 starts on the 50-and-over tour. He entered the week fifth in the Charles Schwab Cup season points standings, the last spot where the player had to only win the tournament to take the $1 million annuity. He earned $440,000 for the tournament victory.

The only player to shoot 59 in senior tour history, Sutherland had 15 top-10 finishes this season, finishing second three times and third twice. His lone PGA Tour victory came in 2002 at La Costa in the Accenture Match Play Championship.

Sutherland finished at 15-under 198. He had a bogey-free round, opening with a birdie on the par-5 first, eagling the par-5 seventh and adding birdies on the par-4 ninth and 16th.

Singh shot a 63. He opened with an eagle and birdied the last two.

Sutherland had a 63 on Friday to move within two strokes of leader Paul Goydos, the tournament winner last year at Desert Mountain in Scottsdale. Goydos closed with a 72 to tie for ninth at 9 under.

Langer led the tour with seven victories, winning three of the five majors, and set an earnings record with $3,677,359. The 60-year-old German has never won the season-ending event.

Canadian Golf Hall-of-Famer Stephen Ames was the lone Canadian in the field, finishing T27 at 6 under par.