Key anniversaries at the Masters 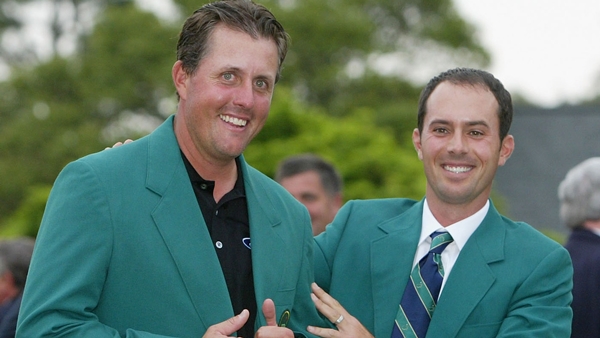 AUGUSTA, Ga. – A look at some of the anniversaries this year at the Masters:

75 years ago (1939): Ralph Guldahl technically became the first winner of the Masters because the name of the championship was changed in 1939 from the Augusta National Invitation Tournament. The opening round was postponed by rain, leading to a 36-hole Sunday. Guldahl, a runner-up at Augusta each of the previous two years, had a 33 on the back nine and closed with a 69 for a one-shot win over Sam Snead. Guldahl finished at 279, the first sub-280 performance in a 72-hole major.

50 years ago (1964): The fourth and final Masters that Arnold Palmer won was by far his easiest. After one-shot victories in 1958 and 1960, and a playoff win over Gary Player in 1962, Palmer went wire-to-wire (including a tie in the first round) to win by six shots. Three rounds in the 60s gave him a five-shot lead over Bruce Devlin, and Palmer closed out victory with a 70. He won by six shots over Dave Marr and defending champion Jack Nicklaus. Palmer set the record with four green jackets, which Nicklaus surpassed with his fifth win in 1975. It was the last major Palmer won.

25 years ago (1989): Nick Faldo rallied from five shots back in the final round with a 7-under 65 to force a playoff, which he won on the second extra hole against Scott Hoch. Faldo had to return Sunday morning due to rain and wrap up a 77 in the third round. He switched putters before returning for the final round, and it paid off. In the playoff, Faldo hit into a bunker on No. 10 and made bogey. Hoch had a chance to win with a par, but he famously missed the 3-foot putt. On they went to No. 11, where Faldo won the first of his three green jackets by holing a 25-foot birdie putt.

20 years ago (1994): Jose Maria Olazabal had 14 wins in Europe and a successful partnership with Seve Ballesteros in the Ryder Cup. He came into his own at Augusta National, closing with a 3-under 69 for a two-shot victory over Tom Lehman. Olazabal was tied for the lead when his second shot to the par-5 15th narrowly stayed up, and he holed a 30-foot eagle putt from the fringe. For the week, the Spaniard had 30 one-putt greens, chipped in twice and saved par all six times he was in the bunker. He was sixth European winner in seven years.

10 years ago (2004): Finally, Phil Mickelson won his first major championship when he made an 18-foot birdie putt on the final hole to end a tense duel with Ernie Els. Mickelson made five birdies on the last seven holes for a 31 on the back nine and closed with a 3-under 69. Els closed with a 67, narrowly missing a 25-foot birdie putt on the 18th hole. The South African was on the putting green preparing for a playoff when he heard the enormous roar for Mickelson’s winning birdie putt. Until that day, Mickelson had been 0 for 42 as a professional in the majors. He would go on to win majors in each of the next two years.