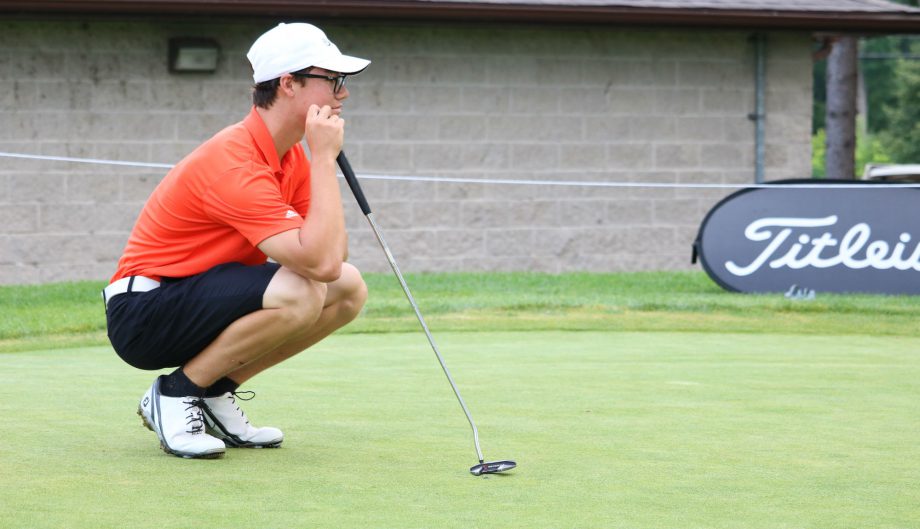 Marcus Khaw shot a 4-under-par 66 and sits as the clubhouse leader after the first round was put on hold due to weather and darkness at the Canadian Junior Boys Championship at Cataraqui Golf & Country Club on Monday.

Khaw registered five birdies and just one bogey for his one-shot lead.

“I started off by hitting a lot of greens but I wasn’t making many putts until I hit one to within a foot of the ninth hole and got my first birdie,” he said, after his round. “I was more consistent and hitting a lot of pars until that birdie and then things really started to happen.”

The 17-year-old from Burlington, Ont., started his opening round with eight straight pars before carding a birdie just before the turn. After he made his second birdie on No. 12, it looked like he was about to get things going but the field was called in at 3:18 p.m. due to inclement weather.

After the break, Khaw immediately scored his only bogey of the day, but he turned it around from there.

“As soon as they let us keep playing I bogeyed my first hole but then the putts started to fall for me.”

In his final six holes he carded three of his five birdies while dealing with the wetter conditions from the weather delay.

Calvin Ross, from Fredericton, N.B., sits in second place after he shot a 3-under-par 67. He too was affected by the break in action, but he still managed to keep his scorecard bogey free and climbed up the standings with birdies on holes three, eight and 16.

Joel Veenstra battled the creeping darkness and carded a 2-under-par 68 just prior to play getting called. The 17-year-old from Smithers, B.C., recorded just one bogey and carded a birdie on his final hole to hold third place.

In the 16-and-under juvenile division, Iguchi (16) and Sehra (14) sit deadlocked at the top of the leaderboard. Johnny Travale, a 16-year-old from Stoney Creek, Ont., sits one stroke behind the co-leaders, after an eagle on the par-4 third hold led to an even-par 70.

Team New Brunswick leads the inter-provincial competition after the team consisting of Sam Reid, Calvin Ross and Stuart Earle shot a combined 2 under par. Team Ontario sits in second at even par and Team Alberta holds on to third place at 1 over par.