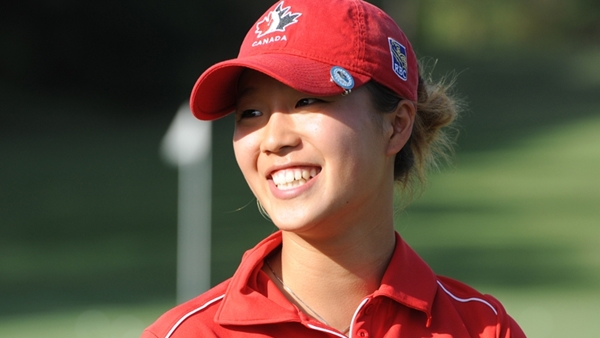 Kim shot 2-under 71 Friday to finish out a week of exceptional play, winning her first title at a British Columbia Golf Championship. The Team Canada member was already 2-under at the turn and only bogeyed once on number 15 that proved to be just a slight speed bump on the way to the title.

“I thought simple. Just hit the fairways and hit the green and two putt or if I get close just one putt it,” she said. “I came into trouble on number 15 a par-3 and bogeyed it but I knew I was still leading then I had a birdie opportunity on number 18 but I thought ‘just make par, don’t do anything stupid’ and it worked out.”

“There was no wind today, it was a perfect and I knew it was going to be my day it felt just like the first day,” said the 19-year-old.

“I was a little nervous going into the round because it was my first opportunity to win this event and I’m just really excited to win” she explained. “I felt like I played really great, I used the advantage of the par-5’s again and it worked out.”

A Ram Choi finished two-strokes back of Kim, finishing second at 8-under. Choi briefly co-led at the midway mark of the tournament after finishing 3-under in back-to-back rounds. Choi shot 3-under for the final round to finish at 8-under.

Alisha Lau played an incredible four rounds of golf to finish third at 6-under. The 14-year-old from Richmond, B.C.’s 3-under-par 70 on Friday was good enough to earn her a top three finish and the final spot on Team British Columbia which will represent the province at the Canadian Women’s Amateur Championship July 22-25 at Craigowan Golf & Country Club in Woodstock, Ont.

The 2014 B.C. Junior Girl’s Champion, Naomi Ko, finished fourth at a 4-under 288. She was followed by Michelle Kim of Surrey, B.C. and Christina Proteau of Port Alberni at 289. Proteau won the Mid-Amateur title.