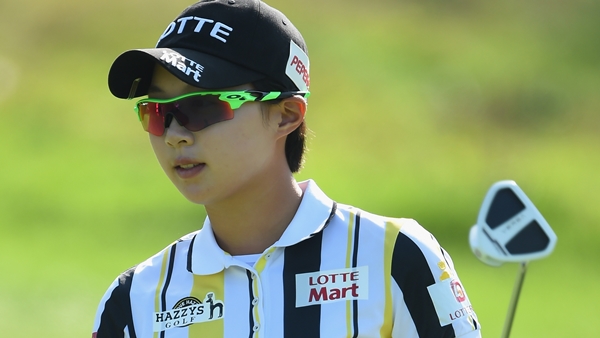 EVIAN-LES-BAINS, France – South Korean teen Hyo-Joo Kim made history look easy, with barely a glitch as she posted the lowest score ever in a major with a 10-under 61 to open the Evian Championship on Thursday.

To boot, the first round of her major debut achieved perfect symmetry, with five birdies each on the front and back nine.

If she didn’t sound fussed about the 61, it’s because she did it last year on Japan’s JLPGA circuit.

“My goal is to have a good experience here. That’s all,” said the 19-year-old Kim, who was in the first year of a physical education course at Seoul University.

Her good experience exceeded the previous best score in a major of 62, by Minea Blomqvist of Finland in the third round of the 2004 British Open – also when she was 19 – and Lorena Ochoa in the first round of the 2006 Kraft Nabisco Championship. In a men’s major, 63 is the lowest, and it has been achieved multiple times.

“I like a hard course,” Kim said. “I felt very comfortable today.”

Blomqvist and Ochoa might still be holding their record if not for Kim’s remarkable escape on the third hole, when she went into the bunker off the tee and still got a birdie.

“She had a few up and downs and a chip-in on the third, par four … after she shot a little bit left,” her caddie Gordon Rowan said. “She had a very difficult chip.”

“She’s not a massive hitter but has a very decent length, and keeps up with the girls. She’s so straight and this is a course where you need to hit fairways because the rough is very thick. Her accuracy into the greens means that she’s never far away. She also has a very good temperament, and even on days when she’s fighting and putts don’t fall, she keeps going.”

Kim is ranked 20th in the world, and leads the Korean LPGA money list with three wins.

She takes a four-shot lead over veteran Karrie Webb into the second round of the last major of the year.

Korean Mi-Jung Hur was five behind Kim in third after a round of 66, while defending champion Suzann Pettersen of Norway and Brittany Lincicome of the U.S. were six behind.

Inbee Park, bidding for back-to-back majors after defending her title at the LPGA Championship, was tied for 12th at 2 under.

Meanwhile, Michelle Wie’s bid for a second major ended early as she retired after just 13 holes, clearly still feeling the effects of a recent finger injury.

Wie had two double bogeys and was 5 over when she pulled out. The U.S. Women’s Open champion was returning after five weeks out and missing four tournaments following a stress reaction in her right index finger. She wore blue strapping around her hand.

“I had hoped it was a week later but I just really wanted to come to France. I really love this tournament,” she said. “The doctors told me `It’s all up to you.’ But they did tell me if it did hurt to stop right away because it could get worse.

“I should have stopped earlier but I was having so much fun out there.”

Wie believed she should be able to play next month, in Asia.

The 39-year-old Webb had eight birdies but was undone by two bogeys.

The last of Webb’s seven majors was at the Kraft Nabisco in 2006, the year she won at Evian.

“Probably the best I putted for a long time. Switched to an old putter I used about 12 years ago,” the Australian said. “I changed swing coaches in the middle of the season, so I’ve actually probably put more work in through the summer than I normally would. The changes are starting to click.”

Alena Sharp is the lone Canadian in the field. The Hamilton, Ont. native opened with a 7-over 78.