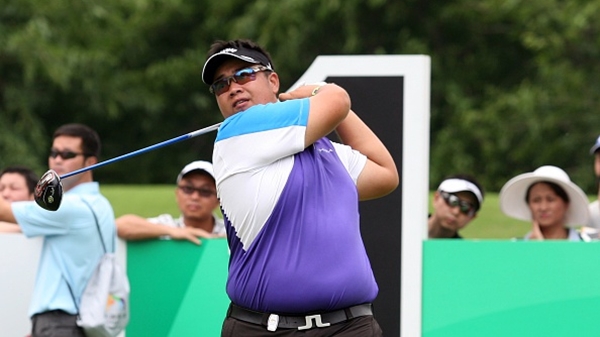 SHENZHEN, China – Thailand’s Kiradech Aphibarnrat shot a 4-under 68 to take the lead after the third round at the inaugural Shenzhen International on Saturday, though he let a five-shot advantage slip to two strokes with a double bogey-bogey on this final two holes.

Kiradech had nine birdies in his round to sit at 12-under 204 overall.

“Good way to start, three straight birdies to jump up at the top. I was still hitting the ball great on the back. Then I made a big mistake on last two holes, not the way to finish,” Kiradech said. “After I play 14 holes and I’m still striking the ball good, I think the job would be done. I think everything will be set.”

Overnight leader Peter Uihlein birdied the par-5 17th hole that Kiradech double-bogeyed to gain three strokes on his playing partner. The American was at 10 under.

“(Kiradech) was playing fantastic all week. Today he was pretty flawless until 17, 18,” Uihlein said. “I still got a chance tomorrow so that’s always nice. If you tell me at the start of the week, I’d be two back, I’d take it and look forward to the challenge tomorrow.”

Both Kiradech and Uihlein are looking for their second European Tour titles. Both won their first titles two years ago – Kiradech at the Malaysian Open, Uihlein at the Madeira Islands Open.

Pablo Larrazabal of Spain matched the low round of the day with a 7-under 65 to move into third place, one stroke behind Uihlein. He had eight birdies and a bogey on No. 17.

“The game was brilliant today,” he said. “I’m hitting the middle irons and the short irons very well and I can put the ball close to the hole.”

Nineteen-year-old Li Haotong, one of China’s most promising players, also shot a 65 to improve to joint-eighth place. He had seven birdies in a clean round.

Bubba Watson struggled for a third straight day at Genzon Golf Club, shooting a 74. He’s in a tie for 58th place at 2 over.