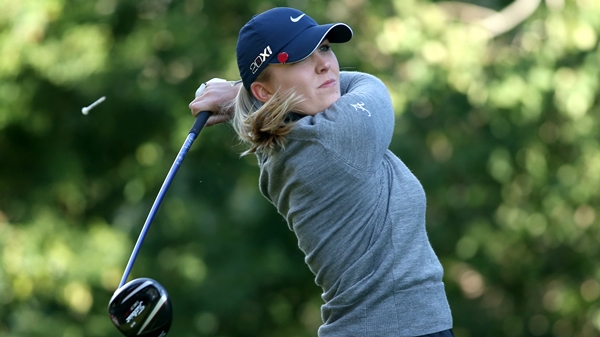 All that stands between Jennifer Kirby and a 2014 LPGA Tour card is 18 holes of golf on the Jones Course at LPGA International. The Paris, Ont. native posted a fourth-round 1-under 71 Saturday to sit tied for 9th at the LPGA Final Qualifying Tournament with a four-day total 8-under 280.

The 90-hole tournament concludes Sunday on LPGA International’s Jones Course.  Kirby, a former Team Canada member, only needs to finish within the top 20 to earn exempt LPGA Tour status for next year. Players who finish in 21 to 45 spot (as well as ties) will also earn conditional status for 2014.

Jaye Marie Green Green (-25) leads all players and entered Saturday’s fourth round with a seven-shot advantage, marking the lowest score after three rounds since the Final Qualifying Tournament moved to 90 holes in 2004. She wasted little time in increasing her lead with birdies on holes five, six and eight, quickly becoming her fourth sub-70 round of the event.

The 19-year-old from Boca Raton, Fla. closed her round with birdies on 12 and 13 to end her third-straight round without a bogey.

Chasing Green, although a long way behind, is South Korean Mi Rim Lee, who fired the second record-breaking score in the Jones Course on Friday with an 11-under 61 to take solo second heading into Saturday’s round. Posting a 3-under 69 on the Hills Course, Lee sits at 16-under 272 for the tournament.

Lee is two shots ahead of two-year LPGA Tour veteran Tiffany Joh (-14), who shot a 4-under 68 to remain in third and three shots behind Joh at 11-under 277 is Stage II LPGA Qualifying Tournament medalist Amy Anderson. The North Dakota State standout carded a 2-under 70 during Saturday’s round.

Seon Hwa Lee of South Korea and Sharon Township, Ohio native Kathleen Ekey are 10-under 278, in a tie for fifth.

Natalie Gleadall of Stratford, Ont. , Stephanie Sherlock of Barrie, Ont., Sara-Maude Juneau of Fossambault, Que., Ashely Sholer of Hamilton, Ont. and Nicole Vandermade of Brantford, Ont. failed to make the fourth-round cut. Other notables missing out included Wake Forest standout Cheyenne Woods, who missed the cut after rounds of 77-73-73-73, finishing at 8-over 296.