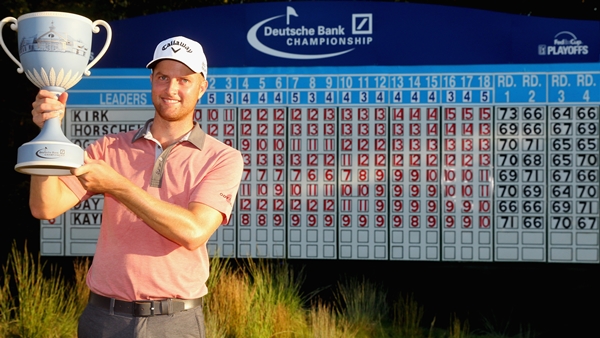 NORTON, Mass. – Chris Kirk made three big putts and captured the biggest win of his career Monday in the Deutsche Bank Championship. Whether that was enough for U.S. captain Tom Watson to add him to the Ryder Cup team was the least of his concerns.

Kirk won for the second time this season. He went the last 37 holes at the TPC Boston without a bogey. He played the final two rounds with Rory McIlroy and outplayed the No. 1 player in the world. And he closed with a 5-under 66 for a two-shot victory in a FedEx Cup playoff event.

Was it enough to convince Watson that he was worthy of a captain’s pick?

“I certainly don’t feel entitled, or feel like I’m a shoe-in to get a pick,” Kirk said. “I’ve obviously really put myself into consideration, and it’s something that I would love to do. But like I’ve said before, the nine guys that made it are automatic. Those are the guys on the team. The other three? If you get in, it’s a bonus.”

Then he looked at the blue trophy next to him and considered what he had just achieved.

“Winning the Deutsche Bank and going to No. 1 in the FedEx Cup, and $1.4 million, that’s plenty for me for one day,” he said with a smile.

Ten shots behind after the opening round, Kirk was so disgusted that he skipped his usual practice session. He was flawless the rest of the week, particularly on Monday in another wild Labor Day finish at the TPC Boston.

Kirk made three big putts on the back nine – two of them for birdie – but what pleased him the most was his 15-foot putt for par on the 15th hole that kept him in the lead.

Billy Horschel had a chance to at least force a playoff – and possibly win – when he stood in the fairway on the par-5 18th hole with a 6-iron in his hand. Horschel chunked the shot so badly that it barely reached the hazard, and he made bogey for a 69.

“The worst swing I’ve made all week,” Horschel said.

Horschel tied for second with 54-hole leader Russell Henley (70) and Geoff Ogilvy, who extended his unlikely run through these FedEx Cup playoffs. Ogilvy was the last of the 100 qualifiers for the Deutsche Bank Championship. He went 65-65 on the weekend without a bogey.

The top 70 in the FedEx Cup advance to the BMW Championship in Denver later this week. Ogilvy went from No. 100 to No. 24, and now stands a reasonable chance of getting to the Tour Championship for the top 30.

Kirk won for the third time in his career, though never against a field this strong, and never with this much riding on it.

He was No. 14 in the Ryder Cup standings, five spots away from being an automatic qualifier. This victory could go a long way toward Watson using one of his three selections on the 29-year-old from Georgia. Last week, Hunter Mahan bolstered his Ryder Cup case by winning The Barclays.

Kirk was trying not to think about that, saying he already had plans to be at the Georgia-Tennessee game the weekend (Sept. 26-28) of the Ryder Cup. But he would gladly break those plans for a trip to Scotland for golf’s version of the Super Bowl.

“I would absolutely love to do it, but I’m not going to really base how happy I am with how I’m playing, or how my year has gone, on whether I make the team or not,” Kirk said.

McIlroy, who started the final round only two shots behind on a course where he won two years ago, fell back with successive bogeys on the front nine, bounced back with a pair of birdies, and then fell out of the mix by missing two short par putts early on the back nine.

Kirk took the outright lead for the first time with a 25-foot birdie putt on the 13th hole. And right when it looked as if he was struggling with his swing, he saved par from a bunker with a 15-foot putt on the 15th. On the next hole, he made a birdie putt from just over 12 feet that gave him a two-shot lead.

That left it to Horschel, in prime position for at least a birdie.

A small consolation for Horschel was going from No. 82 in the FedEx Cup to No. 20, all but assuring a spot in the Tour Championship.

Six players moved into the top 70, though none was more surprising than Ogilvy. He became the first player in four years to go from No. 100 to the third playoff event.

On the Canadian front, David Hearn finished tied for 43rd at 3-under 281. Unfortunately, the result wasn’t good enough to get the Brantford, Ont. native into the FedEx Cup top 70 and advance to the next week’s BMW Championship.

Weyburn, Sask.’s Graham Delaet finished behind Hearn at the Deutsche Bank – tied for 50th at 1-under 283 – but will finish the week 43rd on the FedEx Cup standings which will see him safety move on to next week.