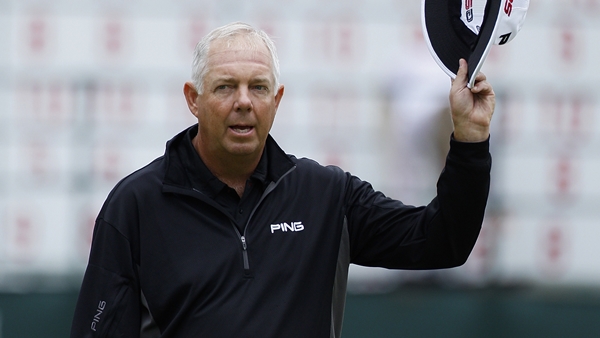 NAPLES, Fla. – Kirk Triplett won the ACE Group Classic on Sunday for his third Champions Tour title, holing a 6-foot par putt on the final hole for a one-stroke victory.

The 51-year-old Triplett shot a 6-under 66 to finish at 16-under on TwinEagles’ Talon Course. He won the 50-and-over tour’s Pebble Beach event the last two years after winning three times on the PGA Tour.

On the par-4 18th, Waldorf drove into a bunker and wound up with a bogey for a 66. Langer’s second shot sailed left, and his 12-footer for par curled around the cup for bogey and a 67.

Triplett’s second shot from a divot landed about 25 feet from the pin. His birdie putt went past the hole and he made the 6-footer for the victory.

Langer also won the 2011 tournament and finished second behind Kenny Perry in 2012. The German star won the season-opening event in Hawaii last month for his 19th Champions Tour title.

Jim Rutledge of Victoria, B.C. shot a blazing 8-under 64 Sunday to climb 31 spots up the leaderboard, into a tie for 11th. Rutledge finish 7-under par for the tourney and was tied with Rod Spittle of St. Catharines, Ont.