Kisner opens 2-shot lead on a course he barely knows 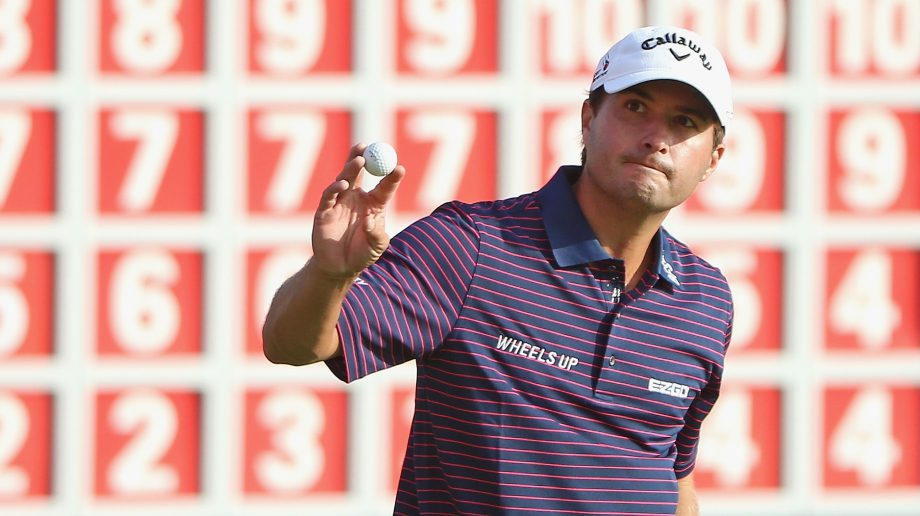 SHANGHAI – Two par saves in the middle of his round and two birdies at the end put Kevin Kisner in a place he has never been.

And that has nothing to do with his first trip to China.

Kisner put together another bogey-free performance Friday in the HSBC Champions for a 6-under 66 and a two-shot lead over Russell Knox going into the weekend of the World Golf Championship. He was at 14-under 130, the lowest 36-hole score of his career, and he was the 36-hole leader for the first time in his career.

It was more than Kisner expected at Sheshan International, mainly because he didn’t have any expectations.

A sore back kept the 31-year-old American from seeing the golf course until he teed it up in the opening round on Thursday. He was so lost that walking off the eighth green, he wasn’t sure how to get to the next hole. None of that seemed to matter.

“It’s just golf, man,” Kisner said. “Doesn’t matter if it was here or wherever. Still get the ball in the hole as fast as you can.”

Only 16 players shot in the 60s on Friday, compared with 41 in the opening round.

Knox started his round with a 40-foot birdie putt that set the tone for the day. He wound up with the low round of the day at 7-under 65, leaving him two shots behind Kisner and with his own tale about being a little unprepared for his first World Golf Championship.

Knox only found out last week in Malaysia that he was in the HSBC Champions when J.B. Holmes withdrew. That was the good news. The problem was getting a visa for China, so wife Andrea came to rescue – twice. First, she filled out all his forms while he played the CIMB Classic and arranged for the meeting with the Chinese consulate in Kuala Lumpur on Monday. Then, she filled in as a caddie for his practice round at Sheshan because Knox’s caddie took an extra day to arrange for his visa.

“My wife was a superstar,” Knox said.

One job apparently was easier than the other.

“We got a stand bag from the pro here and played the quickest practice round ever, and she complained heavily for the last nine holes,” he said with a laugh. “But it was nice to run around quickly, so I did get to see the course. My caddie did not, so I told him what we were going to do.”

The top two players on the leaderboard going into the weekend have never won on the PGA Tour, and both know so much can change over the next two days. Even so, Kisner’s solid play has created a little bit of separation.

Branden Grace of South Africa, who opened with a 63, added three birdies through 10 holes until he forced the issue trying to get further ahead and wound up playing the final eight holes in 2 over. He had to settle for a 71 and was four shots behind.

The buzz came from Li Haotong of China, who spent the afternoon chasing the lead and thrilling the hometown gallery. A bogey on the final hole gave him a 69, and he joined Patrick Reed (70) at 9-under 135.

Li played the PGA Tour China series last year and had a chance midway through the Web.com Tour season to earn a PGA Tour card until fading. Playing at home in a World Golf Championship, he enjoyed the moment – especially seeing his name on the leaderboard.

It wasn’t a lot of fun for some of the biggest names.

Jordan Spieth missed a few good opportunities at the turn, and then ran off three straight bogeys and wondered if he would make another par. He salvaged his day with birdies on the final two par 5s for a 72, though he was 10 shots behind.

“When I get into the breeze, I hit some shots that I was very shocked with today,” he said. “But I lost a lot of focus there, too. I felt like I was very lazy in my routine, very lazy in picking targets. And it bit me with three unforced errors in a row on the back nine there. But I am pleased with the way that we did rebound, because it looked like I could have just bogeyed in.”

Rory McIlroy winced on the range as he felt cramps in his stomach from food poisoning earlier in the week. He wasted a decent start by playing the last six holes in 2 over for a 72 and joined Spieth at 4-under 140. Dustin Johnson looked like he would throw away his round with three straight bogeys around the turn, only to steady himself and finish with three straight birdies for a 71. He was six behind.

Kisner is coming off a breakthrough season on the PGA Tour without winning, though he sure had his chances. Jim Furyk beat him with a birdie on the second extra hole at the RBC Heritage. Kisner went blow-for-blow with Rickie Fowler in The Players Championship until Fowler beat him a birdie on the fourth playoff hole. Kisner also got into a four-man playoff at The Greenbrier Classic that Danny Lee ended up winning.

“See if I can get it done in regulation this time,” he said.