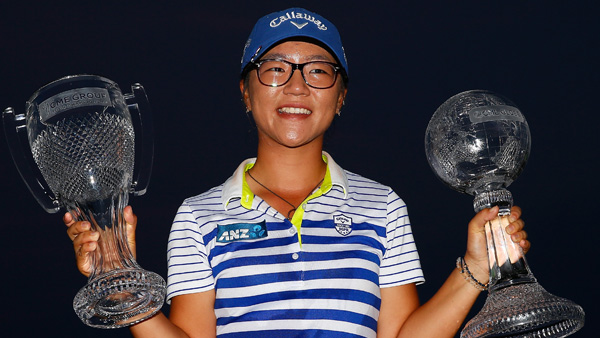 NAPLES, Fla. — The biggest challenge facing Lydia Ko is how she can top a rookie season like this one.

The 17-year-old from New Zealand sat next to a pair of crystal trophies Sunday evening. At her feet was a glass box that was stuffed with cash to symbolize the $1 million bonus she picked up on an historic end to the LPGA Tour season.

She was an instant millionaire when she closed with a 4-under 68 to get into a three-way playoff in the CME Group Tour Championship. She already had finished high enough to clinch the inaugural “Race to CME Globe” and its $1 million bonus.

Then, she collected another trophy by winning the Tour Championship with a par on the fourth extra hole to pick up an extra $500,000. Only the tournament earnings count toward the money list, and it made Ko the first rookie to surpass $2 million in a year.

The most pressure she felt all week was Thursday night, when she had to give an acceptance speech as LPGA rookie of the year.

“It’s been an awesome week, and a week I’ll never forget,” Ko said.

As an amateur, her mother used to give her $10 for every shot she finished under par. Ko won twice on the LPGA Tour as an amateur, and she made her pro debut last year at the Tour Championship by earning $16,063.

So to leave town with $1.5 million in one day was a little difficult to digest.

“It’s huge money, you know?” Ko said. “Even $1,000 is huge money. For us, $100 is huge money. So it’s getting bigger. But the great things about my friends is most of them don’t play golf. When I’m hanging around with them, we don’t talk about golf or the hook I hit on 7 or whatever. So that’s what I really love. I feel like I can get off the course, get my mind free and just be that teenager.”

On the golf course, she looks like a world beater.

Ko already has five LPGA Tour victories, and she’s still not old enough to legally drink the champagne that players sprayed on her when she won. She heads back to New Zealand for a two-month offseason before figuring out what she can do next.

“It’s going to be tough,” she said. “I think I played pretty awesome this year. I’ve had 14 top 10s and three wins. It’s a year that I would have never thought I would have. It’s hard year to top. Just playing consistently is my goal for my whole career.”

She was consistent on Sunday, especially in the playoff held on the 425-yard 18th hole, which yielded only four birdies in the final round.

Ko left it to the others to blink first.

Julieta Granada of Paraguay, who closed with a 71, was the first to be eliminated when she three-putted from the collar of the green, missing a 5-foot par putt that spun in and out of the cup.

Carlota Ciganda of Spain twice had a chance to pick up her first LPGA Tour victory. She closed with a 70, a score that could have been one shot better if not for missing a 3-foot birdie putt on the 17th hole in regulation that would have given her a one-shot lead.

On the third playoff hole, Ciganda had a 5-foot birdie putt for the win and missed it. On the fifth time playing the 18th hole – and fourth in the playoff – she pulled her approach left of the green and watched it bounce down the slope and into the hazard.

“Just missed one shot, and not the right way,” Ciganda said.

She took a penalty drop and chipped to 3 feet. Ko had two putts for the win, and her birdie putt stopped an inch from going in. No matter. The kid was a winner again, and richer than ever.

The top three players – Stacy Lewis, Inbee Park and Ko – only had to win the tournament to assure themselves the $1 million bonus. Lewis never had much of a chance and tied for ninth. Park was four shots worse and tied for 24th.

Ko just went about her work, thinking more about birdies than cash.

“She’s a great player,” Lewis said. “She got that innocence about her that she doesn’t even realize what’s going on. She probably has no idea how the scenarios and points work out. Maybe it’s to her advantage.”

Lewis did not leave empty-handed.

She became the first American in 21 years to sweep the three most significant awards on the LPGA Tour – player of the year, the Vare Trophy for the lowest scoring average and the money title.

“The $1 million would have been nice,” Lewis said. “But those three, that’s what I came here for.”