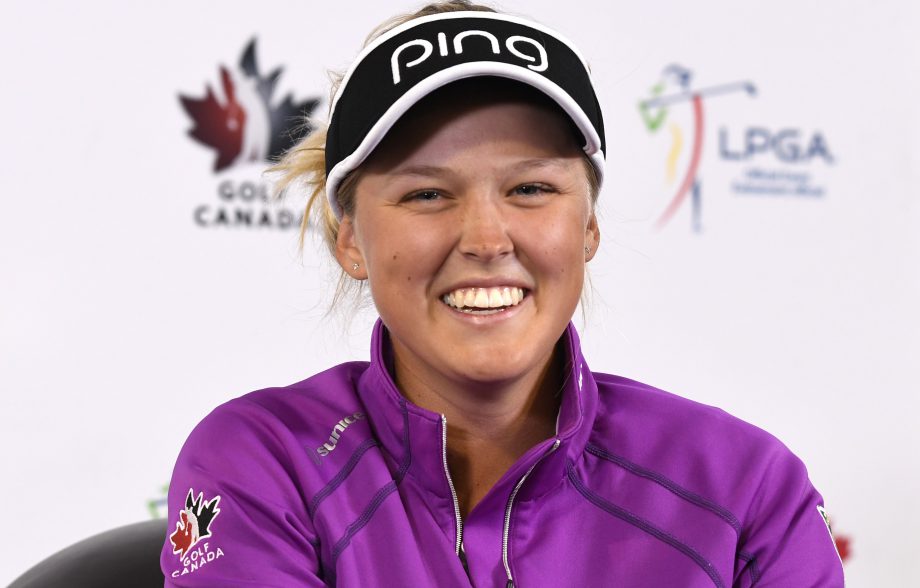 CALGARY – Brooke Henderson is the face of Canadian golf. Lydia Ko is a big hit, too – and every bit as comfortable.

“I feel when I come to Canada, it feels a lot like New Zealand, feels a lot like home,” Ko said Wednesday, a day before the start of play in the CP Women’s Open. “Just even how they say ‘eh’ at the end of sentences. A lot of people back at home say ‘eh,’ too. … Everyone has just been super welcoming, and I think that’s the thing about it. ”

The 18-year-old Henderson had a large crowd for her pro-am round at Priddis Greens.

“Having Canadians and people from all over the world kind of celebrate this national championship is really cool,” Henderson said. “Even this morning, I teed off at 8 in a pro-am, and there were people following me right from the start. My gallery kind of grew throughout the day, and as I finished, that was probably the longest autograph session that I’ve ever had.”

The top-ranked Ko has won the event three of the last four years, the first two as an amateur. The New Zealander won in 2012 at Vancouver Golf Club at 15 years, 4 months to become the LPGA Tour’s youngest winner and fifth amateur champion. She successfully defended her title in 2013, winning by five strokes in Edmonton. Last year back at Vancouver as a pro, she beat Stacy Lewis in a playoff.

The 19-year-old Ko has four LPGA Tour victories this season, winning the ANA Inspiration in April for her second major title.

“Lydia is truly amazing,” Henderson said. “She’s an inspiration to me and I think everybody that knows her.”

Henderson beat Ko in a playoff in June in the KPMG Women’s PGA Championship for her first major title, and successfully defended her Cambia Portland Classic title in early July.

“She’s not afraid to be out in front,” veteran Canadian player Lorie Kane said. “I truly respect the way she plays in that she’s accepting of what happens and she moves past it. I’ve had enough time to play with her to see she’s got all kinds of game. She swings a very big driver a very long way and I’m extremely proud of her.”

“It’s definitely a quick turnaround, but this is one of our best tournaments on our tour schedule, so even the girls that were in Rio I think we’re all excited to be here,” Ko said. “Last week, the course was a little bit like sand belt with a little bit of British flair. This is a bit more traditional. … It’s firm and fast. Last week, we were wearing shorts. This week, we’re wearing sweaters.”

Henderson tied for seventh in Rio.

“Rio was kind of just a sixth major on the LPGA Tour,” Henderson said. “Of course, there was lots of other things going on. … It was cool, but the end of the day it was just four rounds of golf, regular stroke play individual that we do every single week, playing against the same players we play against every week.”

Ko and Henderson are on opposite sides of the draw. Ko will open play Thursday morning on the 10th tee with Jessica Korda and Sei Young Kim, and Henderson will start on No. 1 in the afternoon with Gerina Piller and Amy Yang.

Kane, at 51, is making her record-tying 26th straight appearance in the event. The four-time LPGA Tour winner is being inducted into the Canadian Golf Hall of Fame.

“I’m proud of myself. I’ve accomplished some things that I never thought would have been possible,” Kane said. “To think in 20 years what I have achieved – the four wins? It took me a long time to win the first one and then the next three came pretty quickly after that.”

Kane will match the tournament record for consecutive starts set by Hollis Stacy.

The tour will remain in Canada next week for the Manulife LPGA Classic in Cambridge, Ont., with Pettersen the defending champion.