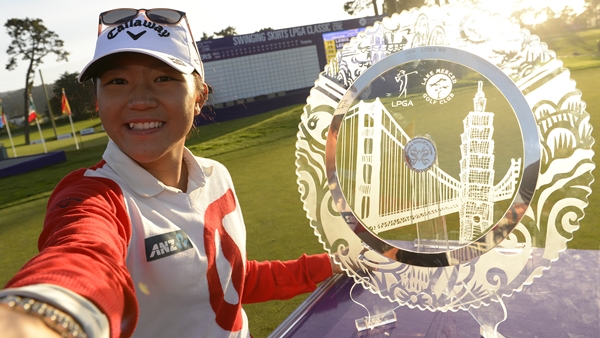 Ko won for the second straight year, this time beating Morgan Pressel on the second playoff hole by rolling in a 5-foot birdie putt on the par-5 18th for her seventh career LPGA Tour victory. She turned 18 on Friday.

Ko made two birdies in the three times she played the closing hole at Lake Merced. She made an 8-footer in regulation to close with a 2-under 70.

Pressel had to settle for three pars on the 18th. She missed a 15-footer in regulation for the win, closing with a 72. Her best chance was a 10-foot birdie putt on the first extra hole that grazed the edge of the cup. Pressel badly pulled an 8-foot birdie putt on her third try with Ko in close.

“At the start of the day, I didn’t know how it was going to go,” Ko said. “It’s been a great birthday week again.”

Brooke Henderson, the 17-year-old from Smiths Falls, Ont., holed a bunker shot for eagle on the par-5 14th to stay close to the lead and she had a 25-foot birdie putt on the final hole to join the playoff. It missed on the low side and she had to settle for a 74.

Ko, already the No. 1 player in women’s golf, moved to the top of the LPGA Tour money list with her second tour victory and third worldwide title this year. But it was hard work. She never had the lead until making her winning putt on the 20th hole of the day.

It was a tough loss for Pressel, whose last victory was in 2008 at the Kapalua LPGA Classic. She had a two-shot lead with four holes to play until making back-to-back bogeys, and then failing to make a birdie on the 18th.

The par-5 closing hole could not be reached in two, so it effectively came down to a wedge and a putt.

“I just couldn’t convert the putts,” Pressel said. “It all comes down to putting. She birdied it twice and I didn’t.”

Ko opened with two straight bogeys and fell as many as four shots behind. She also chopped up the 16th hole with a poor tee shot and an approach that went well long, leading to a bogey. But the Korean-born Kiwi was spared by sloppy play all around her over the final hour on a crisp afternoon.

Henderson, trying to become the third player in history to win on the LPGA Tour before turning 18, was shaky from the start. She hit her opening tee shot to the right behind trees and had to punch out to the fairway, leading to bogey. She came up well short on the par-3 third and made another bogey, and fell out of the lead for the first time since Friday morning.

The Canadian never caught up, though she was never out of it until missing her 25-foot birdie attempt on the 18th.

“It was one of the least nervous putts I had all day,” Henderson said. “I could see it going in in my mind, but it didn’t happen in real life.”

She headed for Texas to try to Monday qualify for the next LPGA event. Finishing in the top 10 only makes a player eligible for the next tournament if she is an LPGA member. Henderson last year was denied a waiver to the LPGA’s minimum age requirement of 18.

Pressel took the lead by making pars, and she started to seize control when she rolled in a 45-foot eagle putt on No. 6 for a two-shot lead. But she missed three short putts on the front nine – two for birdie, one for par – that kept her from getting a little more separation.

The final hour took shape with three big shots. Henderson holed her bunker shot for eagle on the 14th to reach 8 under and get within one shot of the lead. Moments later, Pressel got up-and-down from behind the green to get to 10 under and, in the group ahead of them, Ko made her big birdie putt to reach 8 under.

Pressel dropped shots on the next two holes. Henderson chunked a chip on the 15th and made bogey. Ko went well long on the 16th and missed a 10-foot par putt. Pressel had a one-shot lead going to the last hole and could hear the gallery’s big cheer on the green when Ko made her 8-foot putt to tie her for the lead.