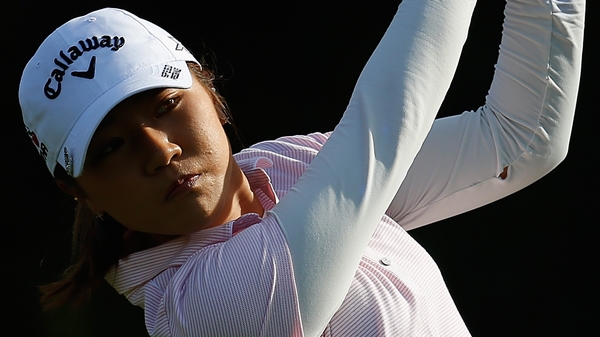 OCALA, Fla. – Lydia Ko is one round from potentially making golf history.

The 17-year-old New Zealander birdied five consecutive holes and shot a 7-under 65 in the third round of the Coates Golf Championship on Friday to take the outright lead in the LPGA Tour’s season opener.

If she hangs on Saturday, she would become the youngest golfer – male or female – to be ranked No. 1 in the World Golf Rankings.

“I really haven’t thought about it,” Ko said. “Like I’ve always said, the rankings come after the results in each tournament. It would be great and it would be a huge honor to be in that position, but we’ve still got another long, 18 holes to go, and you never know what’s going to happen in those holes.”

Michelle Wie and Cheyenne Woods both shot 73 in the third round and fell further back in the 77-player field at Golden Ocala Golf & Equestrian Club.

All of them are chasing Ko, who is chasing history as well as her sixth career LPGA victory.

“There are so many great players that are like one to four shots (back),” Ko said. “You just never know what’s going to happen. I’m just going to concentrate on my game, stay really positive and if somebody else shoots a much bigger score than I do, I can’t really do much about it. I’m just going to focus and hopefully I’ll be able to shoot a good score (Saturday).”

By mid-afternoon Friday, much of the focus had turned to Ko. She three-putted Nos. 10 and 11 to start the back nine, falling four strokes behind leader Jang. Ko slammed her putter into her bag and mumbled to herself, `OK, you’ve got to start working again.”

She outplayed everyone on the course from there, showing the poise of a tour veteran instead of the nerves of a teenager.

“She’s acting more mature than 17 years old, like at least 25,” said Choi, who played a practice round with Ko near Orlando last week. “She’s so mature. Sometimes, when we’re having dinner or lunch, she’s 17 years old. She likes to eat some chocolate or ice cream or that kind of stuff.

“But on the course or on the range, when she has a golf club, I think she totally changes,” Choi added.

It showed when she responded to those consecutive bogeys with a lengthy birdie run.

It started at the par-5 12th, one of eight tribute holes modeled after some of the most famous courses from around the world. It’s a replica of the third and final leg of Amen Corner at Augusta National.

She nearly reached the 12th green in two and then chipped it close. She followed that by hitting a hybrid from the 13th fairway to 3 feet and made the putt.

She had a chance to make it six in row at after hitting a 6-iron to 8 feet at 17, but her putt came up short. She babied another relatively short putt at 18.

“I just didn’t want to ram it by,” she said. “I was a little tentative there. I just have to stay in that concentrated mood, I guess.”

Ko can finish second or third Saturday and still supplant Inbee Park, who is tied for 17th at 3 under, as the world’s No. 1 player.

It would be the latest feat on Ko’s growing resume, which includes winning the inaugural Race to the CME Globe, which included a $1 million bonus last season, and becoming the youngest to win the tour’s rookie of the year award.

Now, she has a chance to really make a mark.

“It’s never over until you pull the glove out of your pocket and put it in your bag,” Ko said. “You’ve just got to concentrate until the last moment.”

Canada’s Alena Sharp is tied for 55th after a third-round 78.