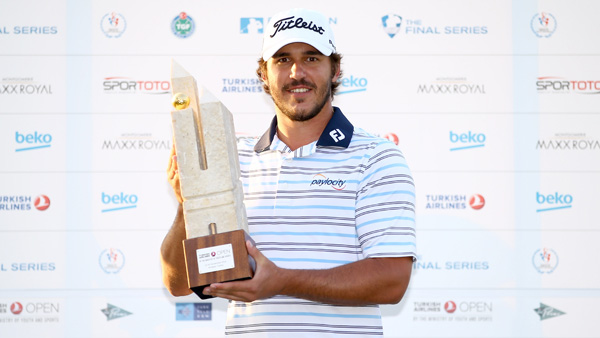 BELEK, Turkey — Brooks Koepka claimed his maiden European Tour title after overcoming a two-shot deficit in the final round to win the Turkish Airlines Open by a stroke on Sunday.

The American player shot a final-round 7-under 65 for an overall 17 under 271 that edged England’s Ian Poulter.

Poulter had a chance to force a play-off but missed a five-foot birdie putt on the last.

Victory means that Koepka will finish the year ranked inside the top 50, which carries an automatic invitation to the Masters.

Other results ensured that top-ranked Rory McIlroy captured the 2014 Race to Dubai crown, his second in three years, after his nearest rivals failed to win here.

McIlroy will return to competition for next week’s European Tour season-ending DP World Tour Championship with the title in the bag with nearest challengers Jamie Donalson, Sergio Garcia and Marcel Siem no longer within striking distance.