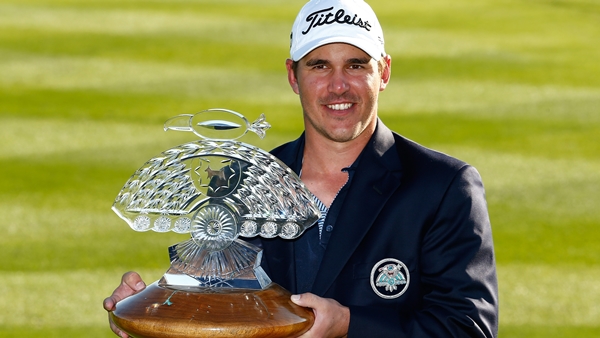 SCOTTSDALE, Ariz. – With an eagle putt that looked as long as his golf journey around the world, Brooks Koepka surged into the lead and stayed there Sunday with a 5-under 66 to capture the Phoenix Open for his first PGA Tour victory.

Lingering for most of the final round, Koepka holed a 50-foot eagle putt from the fringe on the 15th hole and didn’t make any mistakes the rest of the way.

The victory ended a long, arduous road for the 24-year-old from Florida. With no status in America, Koepka played the Challenge Tour in faraway lands like Kazakhstan and Kenya, winning four times to earn his European Tour card and then validating his status as a rising star by winning the Turkish Open last year.

But winning at home brought the strongest validation.

Of the five players who had a share of the lead in a wild final hour at the TPC Scottsdale, Matsuyama had the last chance to catch Koepka until his 18-foot birdie putt on the final hole missed well to the right.

Martin Laird, who had a three-shot lead going into the final round, was tied with Koepka going to the 17th until he sprayed it well right into the gallery on the short par-4 hole and made bogey, and then pulled his tee shot into the water on the 18th and made double bogey. He closed with a 72.

Palmer shared the lead with a birdie on the 15th, but he had to settle for pars the rest of the way for a 66. So did Watson, who reached the front of the 17th green only to three-putt from just over 100 feet and made par. He closed with a 65.

Matsuyama, who holed out from 129 yards for eagle on the first hole and was the first player to catch up to Laird, took the lead with a beautiful pitch behind the green on the par-5 13th. He went 44 consecutive holes without a bogey until Matsuyama three-putted on the 14th hole, and he never recovered. He shot 67.

Koepka already was eligible for the Masters with his tie for fourth at the U.S. Open last summer, and his victory during the final stretch of the Race to Dubai in Europe last year raised his stock. The victory Sunday should put him at No. 19 in the world.

This was his second victory in his last four starts, both against strong fields.

Koepka had not played since the Nedbank Challenge in South Africa two months ago, taking a full month off away from his clubs and working hard over the last few weeks after a change to his putting stroke.

Back-to-back birdies near the end of the front nine kept him in range. A solid chip from behind the 13th green for a 4-foot birdie kept him within two shots of Matsuyama. And his fortunes changed mightily with his eagle putt on the 15th.

A Florida State alum who describes himself as “chill” had plenty of adrenaline pumping on the 17th hole when he hit 3-wood on the 322-yard hole onto the green and over the back. It came to rest on the red hazard line, a foot from going into the water. He chipped to about 12 feet and missed the birdie putt that might have clinched it.

And with the pressure of holding a one-shot lead as he went after his first PGA Tour win, Koepka smashed his driver 331 yards down the middle of the fairway.

Arizona State junior Jon Rahm closed with a 68 to tie for fifth. It was the best finish by a Sun Devil still on the golf team playing in the Phoenix Open. The previous best was a tie for 32nd by Phil Mickelson.

However, the top 10 does not get the Spaniard into Torrey Pines next week because he is an amateur.

Canada’s Graham DeLaet also cracked the top 10. The Weyburn, Sask. native finished with a share of 7th at 11-under.

The finish is DeLaet’s best since the RBC Canadian Open at Royal Montreal, where he also tied for 7th.