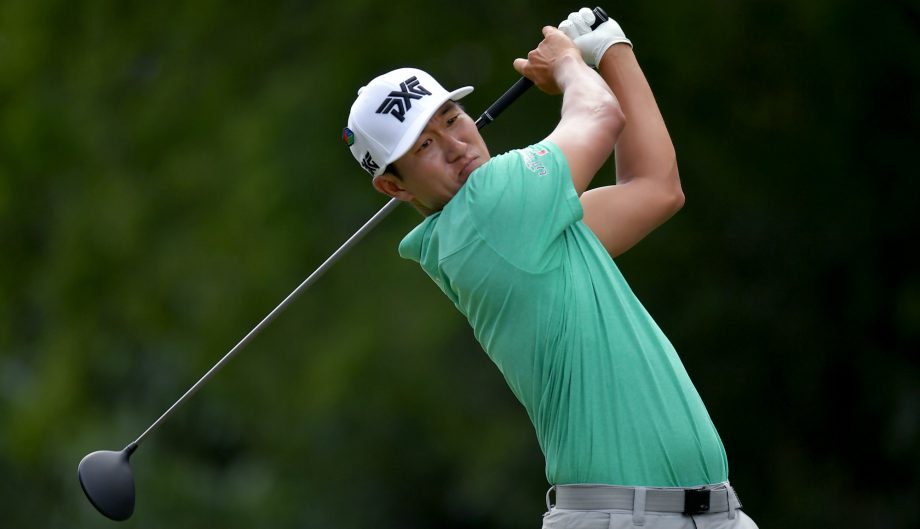 Brooks Koepka leaned in for a closer look at his ball buried in deep rough when a critter he couldn’t identify caused him to jump back with a bit of a startled look.

His best guesses were a frog or rat, though he was too disoriented to be sure. It definitely wasn’t a birdie, because Koepka was on his way to finishing with two straight bogeys after sharing the lead late in his opening round of the AT&T Byron Nelson on Thursday.

A year after losing to Sergio Garcia in a playoff at the TPC Four Seasons, Koepka settled for a 3-under 67 and trailed co-leaders James Hahn and Ricky Barnes by three shots.

“It jumped out and I didn’t know what was going on, freaked me out,” said Koepka, who needed help from a bevy of tournament volunteers and fans to find his ball while hitting two shots out of the thick grass and just missing a chip that would have saved par on the ninth hole, his last.

“I was so in amazement of what just happened, whether it jumped out, scared me. I couldn’t see it because it ran underneath the grass again.”

Matt Kuchar, Jhonattan Vegas, Jason Kokrak and Cameron Tringale shot 66, and top-ranked Dustin Johnson topped the group at 67, a stroke ahead of fourth-ranked Jason Day and Jordan Spieth, the No. 6 player competing in his hometown event.

Masters and defending Nelson champion Garcia, ranked fifth, had three bogeys on the front nine and just one birdie in a 73 that left him tied for 93rd.

The event is the last at TPC Four Seasons, ending the tournament’s 35-year run in Irving. The tournament will move to the new links-style Trinity Forest Golf Club south of downtown Dallas next year.

Tringale was the only player with a lower score than Johnson in a blustery afternoon round, while Hahn and Barnes played in slightly calmer conditions in the morning.

“It was blowing hard and it was gusty,” said Johnson, who has four top-10 finishes in seven previous Nelsons. “I thought it was very difficult to judge the wind and control the ball. Felt like there were a lot of times I hit really good shots that didn’t end up in good spots.”

Using a mallet putter instead of his traditional blade, Spieth made a 10-footer for his second straight birdie on his 17th hole, the par-4 eighth. Normally one of the best putters on tour, the Dallas native was frustrated with that part of his game after missing the cut at the Players Championship last week.

“It’s nothing crazy new,” said Spieth, whose best Nelson finish remains his tie for 16th as a 16-year-old amateur in 2010. “It helps me line up a bit better and that’s kind of been my struggle is lining the putter up where I want to. I just haven’t quite dialed in the speed yet.”

.@JordanSpieth makes the turn at even par, thanks to the new flatstick.

Day birdied the par-4 11th when he chipped to 12 feet off a cart path behind the green after a 326-yard drive on the 309-yard hole. On the next hole, he had to bend his second shot around tree from the rough and saved par. Day eagled the par-5 seventh and curled in a 28-footer for birdie on 18.

“In this wind, I think everyone’s kind of scrambling,” said Day, whose first PGA Tour win came at the 2010 Nelson. “I was not going to drop it all the way back onto the other side of the road. It was just in long grass and I wouldn’t be able to flop it over. It was quite a simple shot. You just had to contact it correctly.”

Cart path? No problem. ??@JDayGolf is inside the top 10.#QuickHits pic.twitter.com/n6WtLS2gAa

Hahn finished a bogey-free round with a 22-foot birdie putt on 18 to match his lowest round of the season. The two-time tour winner saved par with a 24-footer on 14. Hahn’s first four birdies were inside 10 feet.

Barnes, who has made four straight cuts after missing 10 of his previous 13, started a run of three straight birdies with a chip-in on his 15th hole, the par-4 sixth. He had two bogeys.

“I’m having signs of brilliancy,” said Barnes, still looking for his first win in his 255th PGA Tour start. “I just need to put it all together.”

Koepka birdied his first two holes and was 5 under through 13 holes before stumbling late. On No. 8, his 17th hole, Koepka had to lift a folder lawn chair to uncover his ball behind the green. He missed the par putt.

After missing on a birdie chance for the win in 2016, Koepka went in the water on 18, the first playoff hole, to open the door for Garcia to become the only two-time winner since Lord Byron’s event moved to the Four Seasons.