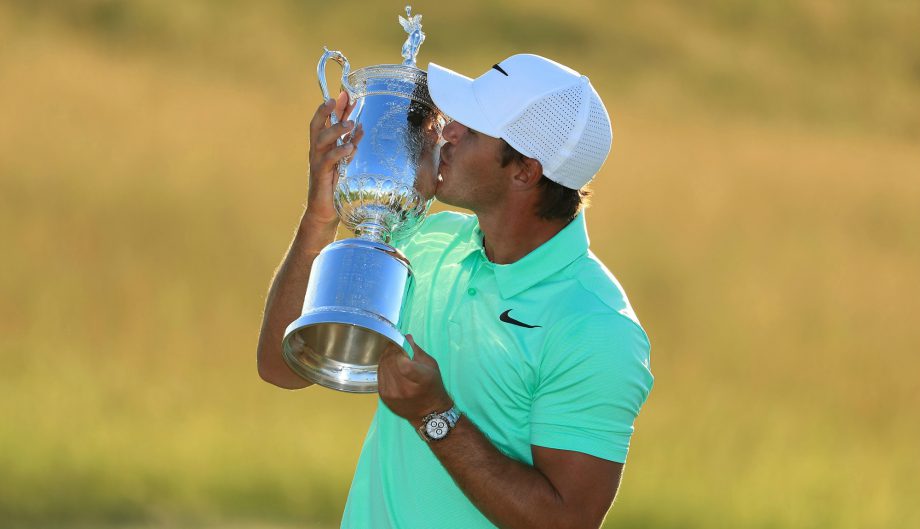 Before their names shared space on the silver U.S. Open trophy, Brooks Koepka and Jordan Spieth were together in a less attractive location.

Both failed by three shots to advance out of the second stage of qualifying school in Texas, leaving them with no status on any tour.

That was five years ago, and each went his own way.

Spieth, a U.S. Junior Amateur champion who won an NCAA title with Texas, received sponsor exemptions to PGA Tour and Web.com Tour events and rode a runner-up finish in the Puerto Rico Open to a meteoric year that ended with him on the Presidents Cup team at age 20.

One three-week stretch on the Challenge Tour took him from India to South Africa to Kenya. He played in Kazakhstan and Madeira Island, Finland and Belgium. He won in Italy and Spain, and he was on the verge of a third victory, this one in Scotland, that would earn him graduation to the European Tour.

And he was ready to come home.

He called Blake Smith, his manager at Hambric Sports, and told him, “I don’t even want to play.”

“I don’t want to say homesick. I was just tired of golf. Tired of travelling,” Koepka said. “I just wanted to be home, even though I was about to win the third one. For some reason, I just wanted to get out and go home.”

He stayed. He won. And then he flew to London early the next morning and qualified for the British Open.

All of which made his U.S. Open victory Sunday at Erin Hills all the more special.

Koepka can’t count the miles he travelled after leaving Florida State, but he wouldn’t trade the path that led him to a major championship at age 27.

“I think it helped me grow up a little bit and really figure out that, ‘Hey, play golf, get it done and then you can really take this somewhere.’ And I built a lot of confidence off that,” Koepka said.

Those who saw him couldn’t ignore the sheer athleticism, raw power and quiet confidence.

“I kept telling people last year after the Ryder Cup,” Brandt Snedeker said, “when Brooks figures out how good he is, he’s going to be a world beater.”

He beat everyone at Erin Hills, and in the end, it wasn’t even close.

One shot behind going into the final round, Koepka didn’t miss a green until the par-3 13th – the only one he missed in the final round – and he saved par with an 8-foot putt that might have been more meaningful than the three straight birdie putts that followed.

“I needed to make that if I was going to win this tournament,” he said.

Brian Harman in the final group behind him made back-to-back bogeys and couldn’t catch up. Hideki Matsuyama shot 66 but started too far back. Koepka closed with a 67 for a four-shot victory, the lowest final round by a U.S. Open champion since Tiger Woods at Pebble Beach in 2000 when he won by 15.

Only after he signed his card did Koepka realize a birdie on the par-5 18th would have broken another U.S. Open record at Erin Hills. He made par and finished at 16-under 272, matching the record to par by Rory McIlroy, who shot 16-under 268 at Congressional in 2011.

It takes a lot to get Koepka excited, and while a U.S. Open certainly does the trick, it was hard to tell. When he started out Sunday, one shot out of the lead and among 12 players within five shots, he did little more than walk to the cup after three birdies on the front nine.

When he was tied for the lead with six holes to play, he gave a light fist pump, clenched his hand a little tighter after each of those four big putts.

“Did you see that fist pump there on 18,” Koepka said with a proud smile.

Yes, both of them, neither to be mistaken with anything Tiger Woods has done over the years.

Despite such a chill personality, there was some irritation about not winning as much as he felt he should. Koepka won the Turkish Airlines Open in 2014 over Ian Poulter and Henrik Stenson. Three months later, he powered his way to victory in the Phoenix Open.

And that’s been it in the big leagues, though he has done well enough to make the Ryder Cup team last year (going 3-1-0 in his matches).

“I’d won once on the PGA Tour, once on the European Tour,” Koepka said. “I just felt like I should be winning more. I don’t know why. It’s one of those things. Not a big fan of losing. I don’t think anyone out here is. And I just couldn’t stand the fact that I’d only won once.”

This makes two on the PGA Tour, and it was a big one.

“It’s crazy to think that this is only his second win,” Justin Thomas said. “But he’s a great player and he has no fear. … When he’s on, there are not many people in the world better.”