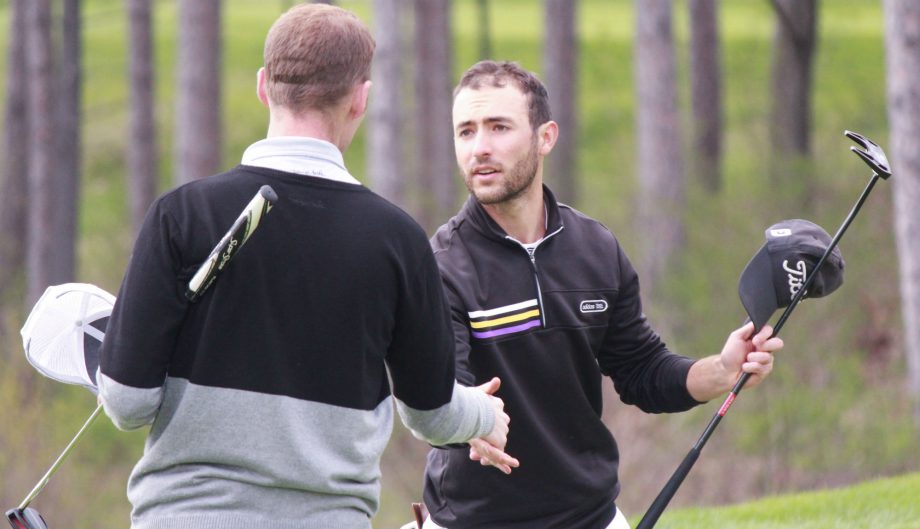 Chase Komaromi and Stephane Dubois both shot 1-under 71 to win co-medallist honours at the U.S. Open Local Qualifier at Beacon Hall Golf Club in Aurora, Ont.

Komaromi, from London, Ont., was the sole leader of the tournament at 2-under when he was making the turn to the back nine. After a bogey on 10, the 23-year-old amateur managed to stay at 1-under to finish off the round.

“I started off well and made a few good par saves early,” he said. “I figured if I kept putting well and hitting the middle of the greens I might be able to get in a pretty good score. The last couple of holes I made a couple of sketchy first putts, but I was able to clean them up with some three footers.”

Dubois got off to a rocky start when he bogeyed the opening hole, but the Brantford, Ont., native managed to bring himself back to even with a birdie on the second hole.

“I got out to the first tee, elected to hit driver because I figured if I’m going to miss, I’m going to miss close to the green,” he said. “I then probably hit my worst tee shot of the day, ended up taking a bogey on the first, but got it back with a tap-in bride on the second.”

After dropping a birdie on six and make the turn at 1-under, Dubois managed to play the back nine even par and secure himself a spot at the top of the leaderboard beside Komaromi.

Dubois and Komaromi, along with Peter Laws (E), Beon Yeong Lee (E) and Ferrier (+2), will move on to the next round of the qualifying process and have earned a ticket to sectional qualifying on June 5.

The tournament was the first U.S. Open Local Qualifier to be held on Canadian soil since 1999 which worked to the benefit of the large Canadian representation in the field.

“It’s nice to not have to go to Michigan to play,” said Komaromi. “It’s good to stay here, close to home and you can’t play on a better course than this. It’s a pleasure.”

“With as much as Canadian golf has to offer, extending a qualifier to Canada, in Ontario or anywhere across the nation, is a good move,” said Dubois. “I think we’ve proven that there’s enough solid, competitive players out here that we should have more in the future.”

Both Komaromi and Dubois posted the low scores of the day despite having limited playing time at Beacon Hall. Komaromi managed just one practice round on Friday while it was Dubois’ first time playing the course.

“I played a practice round on Friday and I would have even played in the snow,” Komaromi said. “It was awesome.”

Branson Ferrier secured the final spot into sectional qualifying after he won a four-man playoff between J.C. Deacon, Russell Budd and Kevin Fawcett (a). Deacon and Budd were each eliminated after the first playoff hole while Ferrier had to play two additional holes to decide the winner.

The day got off to a slow start when a frost delay pushed the starting times from 7:30 a.m. to 9:15 a.m. while cold and windy conditions resulted in only two golfers able to post scores in the red.

THE TOP-5 ADVANCING TO SECTIONAL QUALIFYING

Chase Komaromi (a) of London, Ont.
Made it through the 2016 Canadian Open Regional Qualifier, but he posted an 8-over in the Final Qualifier and failed to make it to the final field.

“The atmosphere was great,” Komaromi said. “To see people walking out there which was awesome, and this course is phenomenal so it was a real treat to play here.”

Stephane Dubois of Brantford, Ont.
Has participated in multiple USGA championships and matched the day-low score of 71 while playing Beacon Hall Golf Course for the first time.

“I’d love to play it if it wasn’t so windy, and know that I know the course a bit more, but it leaves a real good taste in my mouth,” he said.

Peter Laws of Whitby, Ont.
Qualified and competed in the 2013 RBC Canadian Open where registered back-to-back 74 rounds and failed to make the cut by three strokes.

Beon Yeong Lee of Montreal, Que.,
The 27-year-old headed into the final three holes sitting at 2-under, but bogeys at 16 and 18 resulted in an even-par finish.

“It was a tough day, a lot of wind and the course was playing tough, they moved every tee box really far back,” he said. I was struggling with my tee shot but I made a lot of up-and-downs and when I need to make a birdie, I made a birdie.”

Branson Ferrier of Barrie, Ont.
Won a four-man playoff to secure the final spot into sectional qualifying. He was sitting at 1-under entering the final three holes, but scored a bogey on both 16 and 17 before he registered a double-bogey on 18, forcing the playoff.

Tee times were delayed by an hour and 45 minutes due to frost.

Four players competed in a playoff for the final spot: J.C. Deacon, Russell Budd, Kevin Fawcett (a) and Branson Ferrier.

Fawcett is the alternate and Deacon is the second alternate.

First international local qualifier held on Canadian soil since 1999 when the Golf Association of Michigan held a qualifier in Windsor Ont., at Essex Golf and Country Club.

Top five finishers receive an exemption into the sectional qualifying round where 980 gofers will compete for a to-be-determined number of slots on June 5.

No. 3 ranked Canadian course by U.S. Magazine Golfweek for courses built after 1960, and No. 11 on ScoreGolf’s 2016 list of Canadian golf courses.

Photos of the event will be made available on our Flickr page here.