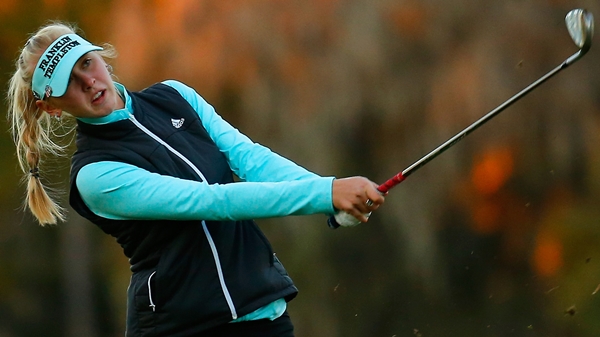 OCALA, Fla. – Jessica Korda pulled a hand warmer out of each jacket pocket, showing just how cold she was during the opening round of the LPGA opener.

Her scoreboard told a much different story.

The 21-year-old American shot a 6-under 66 in the opening round of the Coates Golf Championship on Wednesday and was in a three-way tie with fellow American Stacy Lewis and Azahara Munoz of Spain. All three teed off in windy conditions and finished in chilly temperatures just before dark.

She might be in for more of the same Thursday morning, with temperatures expected to be the mid- to late-30s for the early tee times.

Twenty players failed to complete the opening round at Golden Ocala Golf & Equestrian Club, which boasts eight tribute holes from famed courses around the world. They will finish up beginning at 7:30 a.m. Thursday, just before Korda, Lewis and Munoz tee off in the second round.

Only 26 of 120 players were under par when play was halted.

American Austin Ernst and Ha Na Jang of South Korea finished at 5 under, one stroke ahead of New Zealand’s Lydia Ko and South Korea’s Na Yeon Choi. Nineteen-year-old American Lexi Thompson and Mi Jung Hur of South Korea were 3 under.

Top-ranked Inbee Park was 1 under, one shot ahead of reigning U.S. Women’s Open champion Michelle Wie. Cheyenne Woods, the niece of Tiger Woods, was 4 over through 17 holes.

Ernst was maybe the most surprising name on the leaderboard. She hit 16 of 18 greens in regulation and made just about every putt inside of 10 feet.

“I’ve had rounds in the past where you’ve hit it close and then you can’t get anything to go in,” Ernst said. “But today everything was going in so I was really confident with everything.”

Korda, Lewis and Munoz were feeling it, too.

Korda straightened out an errant driver on the front nine and birdied six of her final 13 holes. Considering she’s won two of the last three LPGA season openers – in Australia in 2012 and in the Bahamas last year – starting fast is nothing new.

“I just feel like I’m refreshed and ready to go,” she said. “I try and bring the mentality with me all the time, every time I try to play, but for some reason it just shines brighter the first event of the season. Honestly, I don’t know what it is about it. I’m just happy to be back. It’s so much fun. It’s like the first day of school; you’re always happy to be back the first week of school.”

Lewis birdied five of her final six holes, the last coming on an uphill, 6-footer just after the horn blew.

“I stayed patient out there,” Lewis said. “Finally, on the back nine, I got more comfortable with being back playing again and just started hitting golf shots. It was a good day. I almost wish we didn’t have darkness and I could keep going since I finally got into a rhythm there. “

Munoz was solid throughout, hitting 17 of 18 greens in regulation, and closed with consecutive birdies to make it a three-way tie at the top. The only green she missed was at the par-4 13th, her approach shot coming up just a few feet short and rolling off the front.

“I gave myself a lot of opportunities and I made them, too,” she said. “If I didn’t hit a really good shot, I made a couple nice 5-, 6-footers for par, so that was nice.”

Canada’s Alena Sharp, the lone Canadian in the field, opened with an even-par 72.