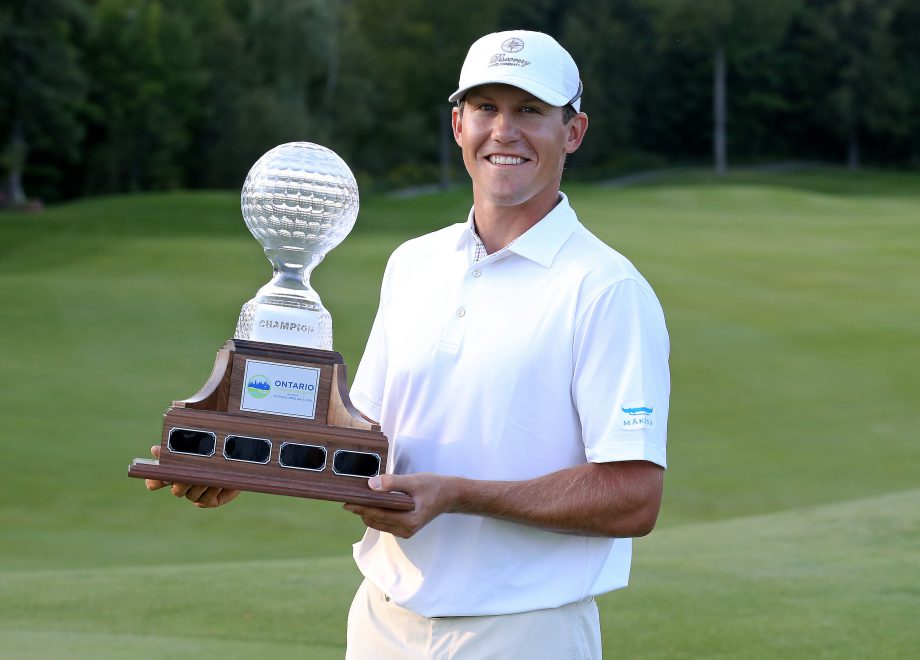 The 25-year old posted his second straight round of 64, going 16-under on the weekend to post the lead at 19-under in the clubhouse, then drained a five-foot birdie putt on the 18th hole (the fourth hole of a playoff) to defeat Ruiz and solidify his position atop the Order of Merit and guarantee a spot in The Five along with Web.com Tour status for 2018.

“Being able to shoot 16-under on the weekend when you set that goal is pretty awesome. I’ve never done that before, not even close,” said Hickok, who had finished second in his two previous starts at the National Capital Open to Support Our Troops and Cape Breton Open. “It’s a step in the right direction and it’s not another second place, so I’m happy about that.”

Starting the day eight strokes off the 54-hole lead held by Ruiz, Hickok started quickly with three straight birdies out of the gate, then made four straight birdies on holes 8-11 to get within two of Ruiz’s lead. Ruiz, who defeated Hickok by one shot earlier this year at the Staal Foundation Open presented by Tbaytel, saw his lead evaporate with a triple bogey at No. 12, however, quickly turning what looked like a safe lead into anyone’s game.

That’s when Hickok produced two more birdies at the 14th and 15th holes, and after three closing pars, he posted the clubhouse lead at 19-under par and headed to the range to wait and see if he’d be the winner.

Ruiz refused to go down without a fight, however, coming up with birdies on 14 and 15 to bounce back. Down to his last chance at the 72nd hole, the 23-year old poured in a 25-footer from the fringe to send the tournament into extra holes.

The first three bonus stanzas settled nothing, as both players posted pars on the 18th, 18th and ninth holes. It was on the fourth hole, however, that Hickok drew upon a shot he had hit in regulation and then on the range afterward to try and close out the tournament.

“It was a shot I had been hitting on the range after I had finished, and I was just striping it,” said Hickok of a 9-iron from 143 yards, which he hit to five feet from the pin. “I told my caddie, Craig, who did an awesome job this week, that it’s just another shot and I was able to stick it in there close.”

Hickok emerges from the win with the Order of Merit lead firmly in his grasp, as only a Robby Shelton win next week at the Freedom 55 Financial Championship and a finish of worse than 19th by Hickok can create a change atop the season-long money list. Still, it was no easy task to come out on top this week, as all five members of The Five finished T4 or better at National Pines.

“It’s unbelievable. This course yielded some of the best players all year. Heading into today, I was in seventh place but looking in front of me, there were four guys that could jump me in The Five. I think that’s what good courses do – they bring out the best players,” said Hickok, reflecting on what has been an incredible year that still has one goal left to be achieved: the Order of Merit title next week.

“I’ve had three seconds and two wins, and it’s not even guaranteed. These guys are just that good. If you’re not playing well, someone else is, and they’re going to jump you. I know the purse is bigger next week, so I’ve gotta go out there and do it again,” said Hickok.

Ruiz’s runner-up finish represents his second of the year to go with his victory in Thunder Bay and moves him to No. 3 on the Order of Merit, while Robby Shelton maintains his spot at No. 2 with a T4 finish. No. 4 Patrick Newcomb and No. 5 Lee McCoy also finished in a tie for fourth with Shelton.

25-year old Kramer Hickok is in his first season on the Mackenzie Tour and ranks No. 1 on the Order of Merit thanks to wins at the Ontario Championship hosted by National Pines Golf Club and Players Cup, plus runner-up finishes at the Staal Foundation Open presented by Tbaytel, National Capital Open to Support Our Troops and Cape Breton Open.

With the win, Hickok becomes the second player during the PGA TOUR era on the Mackenzie Tour (2013-present) to surpass $100,000 in earnings.

With only the Freedom 55 Financial Championship left this season, the only scenario keeping Hickok from finishing No. 1 on the Order of Merit would be a win by Robby Shelton next week in London and a finish of worse than 19th by Hickok.

Hickok’s final round 8-under 64 matches Patrick Newcomb at last week’s Cape Breton Open for the lowest final round by a winner this season.

With a total score of 13-under par in a tie for ninth, Vancouver, British Columbia’s Seann Harlingten finished as the top Canadian on the leaderboard, earning Freedom 55 Financial Canadian Player of the Week honours and a $2,500 prize.

ONE WEEK LEFT IN RACE FOR THE FIVE

With his win on Sunday, Kramer Hickok assured himself a spot in The Five and status on the Web.com Tour next season. Below are the top five through 11 of 12 events this season: