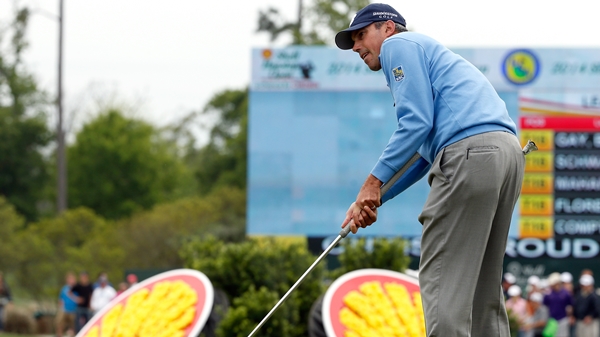 HUMBLE, Texas – Matt Kuchar didn’t have the result he had hoped for while playing in the final pairing at last week’s Texas Open.

The six-time PGA Tour winner, who closed with a final-round 75 on his way to a fourth-place finish last week, will have the opportunity to show what he learned from that disappointing finish at this week’s Houston Open.

Playing in the final pairing, Kuchar vaulted past a struggling Sergio Garcia with a 4-under par 68 on Saturday – overcoming windy conditions at the Golf Club of Houston to match the low round of the day and take a four-shot lead after three rounds.

Kuchar stands at 15-under overall heading into Sunday’s final round, four shots ahead of second-round leader Garcia and Cameron Tringale. The three will be paired together on Sunday.

“It’s a nice position to have played well last week, to have been in the last group with a chance to win and again to come back this week, completely different course, and have another shot to win,” Kuchar said.

Kuchar’s last win came at the Memorial last year, and he has eight top 10 finishes this season in 10 events.

He’ll have the opportunity add to that resume on Sunday, weather permitting, as well as fuel his surging confidence leading into next week’s Masters, where he finished in a tie for eighth last year.

The prospect of a winner’s share of nearly $1.2-million, however, has Kuchar locked in on this weekend first – even with the prospect of competing for his first major championship looming next week.

“I’ve been playing some steady golf for a couple of years now and feel like my chances of playing well tomorrow are pretty good,” Kuchar said. “Having a four-shot lead is a great position to be in.”

The golfers went off both tees in threesomes early Saturday morning in anticipation of severe weather in the evening, a format they’ll use again Sunday with hopes of avoiding a Monday finish leading into next week’s visit to Augusta National.

Garcia, who surged ahead with a 7-under 65 on Friday, began the day with a one-shot lead over Kuchar. That disappeared quickly after the Spaniard bogeyed the first to fall back to 11 under and into a tie with his playing partner, Kuchar.

That was just the beginning of the struggles for Garcia, who later put his tee shot into the water on No. 10. He finished with a 1-over 73 after matching the course’s low mark of 12 under after two rounds.

“Obviously, I didn’t play as well as yesterday with the difficulty,” Garcia said. “… It wasn’t that easy.”

Kuchar, meanwhile, birdied the first to move into the lead – a spot he didn’t relinquish. He added back-to-back birdies on No. 4 and 5 to move to 14 under, and he added three birdies in a row on the back nine.

He reached 16 under with a birdie on the par-3 14th before three-putting the 18th and settling for 15 under.

“It’s unbelievable,” said Ben Curtis, who is tied for 5th at 8 under with Rickie Fowler. “(Kuchar’s) on a great roll the last few years. Obviously, he’s playing very confidently, and that makes a huge difference.”

Kuchar missed his first four cuts at the Houston Open, but the American finished tied for eighth in 2010 and 2011 before not playing in the tournament the last two years.

His three rounds in the 60s this week have only been matched by Tringale, who shot a 3-under 69 on Saturday while playing in the next-to-last pairing.

Phil Mickelson, after withdrawing from last week’s Texas Open with a muscle pull in his right side, was inconsistent from the opening hole Saturday.

The five-time major winner left his opening two approach shots short of the green, the second of which found the bunker and caused him to slump over in the fairway. That led to the first of back-to-back bogeys, though he did recover with three straight birdies on the back nine before settling for an even-par 72 – leaving him in a tie for eighth at 6 under.

“I don’t know if I’ll have a good round tomorrow or not,” Mickelson said. “But it’s close, a lot closer than it’s been.”

Fowler matched Kuchar’s low round in Saturday’s chilly conditions, posting a 4-under 68 and moving to 8 under overall.

With rain forecast for Saturday night and throughout Sunday, the golfers will once again tee off in threesomes early on Sunday morning.

Canada’s Graham DeLaet shot an even-par 72 on moving day. He sits 3-under par and tied for 23rd.