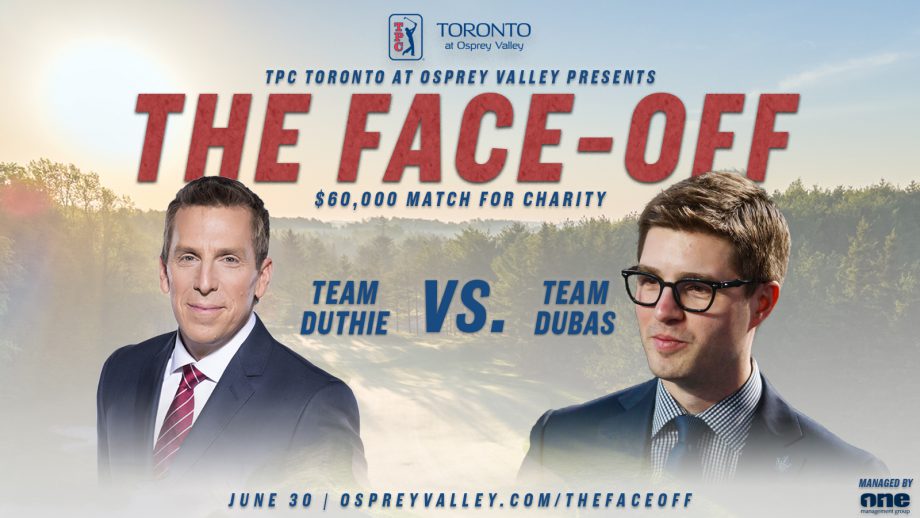 Dubas converted a clutch birdie putt on the 17th hole to take a lead that he and his team would not relinquish, leading to a one-stroke victory over Team Duthie in the 18-hole modified stroke play contest.

A total of $60,000 in donations from TPC Toronto and the Humeniuk Foundation was on the line for a charity of each player’s choice, with Dee leading the way by earning $20,000 for KidSport Ontario and Dubas earning $18,000 for the You Can Play Project. $11,000 went to both The Frontline Fund and the Down Syndrome Association of York Region on behalf of Team Duthie.

“There are a lot of charities that need our support right now, and for us to help out just by playing some golf and having some laughs together was such a treat,” said Dubas. “Our sincere thanks goes to TPC Toronto at Osprey Valley and the Humeniuk Foundation for putting together a great event and supporting some great causes in our communities.”

“All four of us had great charities, and that’s the best part of it. We won today, but these great organizations are the real winners and hopefully we can keep doing this and having more fun in the future,” said Dee.

The Face-off saw Team Dubas and Team Duthie compete in a unique 18-hole stroke play format, consisting of six holes of net best ball, six holes of modified alternate shot and six holes of scramble. After falling into a five-shot deficit through 12 holes, Team Dubas clawed their way back thanks to a number of solid drives from Dee and some timely solid shots from Dubas, who found the par-5 13th green in two leading to a birdie that tied the teams with five holes to go.

Dee’s drive over the water and subsequent approach with a wedge on the risk-reward 17th hole led to Dubas’ successful eight-foot birdie putt to give Team Dubas their first lead of the day, and when both teams made par on the home hole, the match’s outcome was secured.

The $60,000 in donations come in addition to the $350,000 in donations already announced by TPC Toronto at Osprey Valley and the Humeniuk Foundation towards COVID-19 relief efforts and community services this spring.

“We couldn’t be happier with the support we received from Kyle, Gerry, James and Jeff today,” said TPC Toronto at Osprey Valley President Chris Humeniuk. “Our goal for this event was to create a platform and raise some awareness in addition to some financial support for some outstanding charitable causes. To have the participation and engagement that we did from these gentlemen means an incredible amount to us, and we look forward to many more events like this one in the future.”