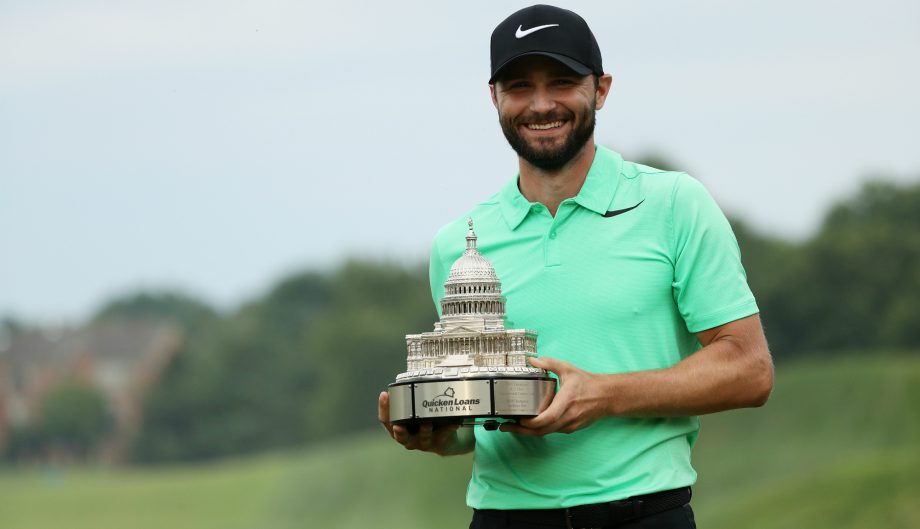 Kyle Stanley was in tears on the 18th green after he holed a 5-foot par putt to win the Quicken Loans National in a playoff over Charles Howell III. He wept again in the interview room as he spoke about the long slump between his first and second career victories and the doubts that his game would ever return.

He believed he could win again. But he never really had to think about it until midway through his round on a wild Sunday at TPC Potomac.

“There was some doubt there for a little bit. Yeah, I mean, it’s no fun,” Stanley said, wiping away tears. “You certainly question if you’ll get back … and have a moment like this. It makes this pretty special, for sure.”

On a day when about a dozen players had realistic chances to win, Stanley moved into a share of the lead for the first time with a birdie on the par-5 10th as the leaders faltered behind him. He never had the lead alone until the trophy was his.

Stanley and Howell began the day four shots off the lead, playing together in the fourth-to-last group. Stanley got into the mix with birdies on the fifth, sixth and eight holes, none of the putts longer than 10 feet.

Howell nudged ahead momentarily with a 27-footer for eagle on the short par-4 14th, only for Stanley to match him with a two-putt birdie.

Both parred the final four holes to shoot 4-under 66s and finish at 7 under, and no one could catch them. Howell had a 21-foot putt to win on the final hole of regulation that rolled over the left edge of the cup.

Playing the par-4 18th again in the playoff, both missed their tee shots to the right, with Stanley getting lucky to draw a good lie. Both missed the green. Howell’s chip came up short and he missed the 11-foot par putt. Stanley chipped to 5 feet and pumped his fist as the putt dropped.

Stanley’s previous win came in 2012 at the Phoenix Open. Later that year, he was ranked a career-best 47th in the world. He declined steadily after that, bottoming out at No. 683 in May 2015.

Even before this week, he was having his strongest season since that 2012 campaign, with four top-10 finishes and three missed cuts in 19 starts.

For three days, the event had been a staid affair, with a lackluster field, small galleries and steady, sometimes dull golf from David Lingmerth, who led after each of the first three rounds. Tournament host Tiger Woods did not attend while he seeks treatment for his use of prescription drugs.

On Sunday, the crowds were bigger, the course was softer and chaos broke out. Then it started pouring. A pop-up storm temporarily soaked TPC Potomac and doomed the chances of Sung Kang, who didn’t pack any rain gear in his bag and missed a 4-foot birdie putt in the heart of the downpour just before play was stopped for 5 minutes. When play resumed, he hit his tee shot into the water on the par-3 17th.

“It was so unfortunate,” Kang said. “There was a zero percent chance of rain today and it was raining so hard.”

His consolation prize was qualifying for his first British Open. The top four players who weren’t already exempt earned spots, and Kang, who finished in an eight-way tie for fifth, got the final berth because of his world ranking.

The other British Open qualifiers were Stanley, Howell and Martin Laird of Scotland, who closed with a 67. He tied for third at 5 under with Rickie Fowler, who shot a 65.

Fowler embraced his role as the tournament’s star attraction, making a career-best nine birdies, but he lamented the one hole that got away – the easy 14th, where his drive found the water and he made double bogey.

Howell, who hadn’t played in more than two months because of a rib injury, notched his 16th career runner-up finish. He hasn’t won in 10 years and never imagined he’d come so close this week.

“Going into this week I was extremely rusty,” Howell said. “I really can’t believe how well I played.”

Lingmerth coughed up the lead immediately with a bogey on the first hole. His chances ended when he pulled his drive on the punishing par-4 11th into a hazard and made double bogey. He closed with a 73. Daniel Summerhays, who blew a three-shot lead at the Memorial a month ago, moved in front with a birdie on 2 but gave it back with a double bogey on 4. He shot 74.

This win means so much. ?

Playing on a sponsor exemption, 20-year-old Australian Curtis Luck also held the lead briefly but coughed it up with bogeys on Nos. 8 and 9. His top-10 finish means he won’t have to use a sponsor exemption at the Greenbrier Classic next week.

Stanley is heading home for a week off before he gears up for Royal Birkdale. At some point the tears will give way to satisfaction.

“I wish I didn’t cry so much, to be honest,” he said. “It just feels good to put the work in and see the rewards. I think that’s where most of the emotion’s coming from.”

Abbotsford native Nick Taylor was T29 at 1 over par.