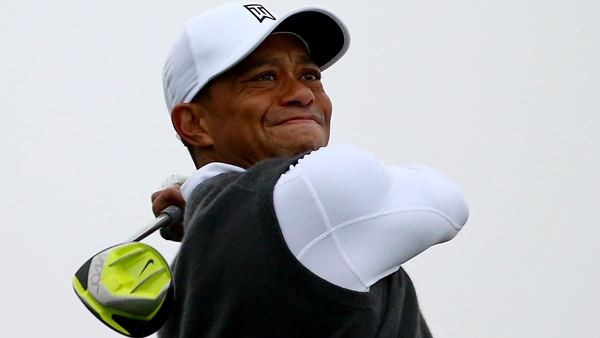 SCOTTSDALE, Ariz. – Rain wasn’t the only thing that put a damper on the Phoenix Open on Friday.

The rowdiest event on the PGA Tour goes into Super Bowl weekend without Tiger Woods, who had the worst score of his career and missed the cut by 12 shots. Also gone is Phil Mickelson, who had his worst round on the TPC Scottsdale in six years.

Martin Laird carried on nicely without them.

Once the rain stopped, Laird played his best golf and he doesn’t think that was a coincidence. He ran off four birdies in a five-hole stretch until making his first bogey of the tournament on his final hole for a second straight 5-under 66.

That gave him a two-shot lead over Daniel Berger (69), with Justin Thomas (68) another shot behind. Both 21-year-old rookies received sponsor’s exemptions. A trio of Masters champions – Bubba Watson (71), Zach Johnson (70) and Angel Cabrera (69) were in the group four shots behind.

That’s not who the crowd came to see.

Woods was playing the Waste Management Phoenix Open for the first time in 14 years. “Welcome back!” the gallery shouted to him on Thursday. “Thanks for coming!” was the refrain on Friday as he walked off his final green with an 11-over 82.

It was his highest score in 322 official tournaments in his career.

“We all have days like this,” Woods said after a day unlike any other he has had in his career.

Mickelson had a 76, his highest score in this event since he opened with a 76 in 2009 and missed the cut. Neither are going to the Super Bowl. Mickelson flew home to San Diego, Woods to Florida, and both will meet up next week in Torrey Pines.

It was the first time since The Greenbrier Classic in 2012 that they missed the cut in the same event.

“Hopefully, we will be able to get it turned around for next week,” Mickelson said.

Laird would seem to thrive in such wet, chilly conditions based on his birth certificate alone. He was born in Scotland, though he played college golf at Colorado State and has been living in Arizona for the last 14 years. He didn’t even play a European Tour event until he had his PGA Tour card.

But living in Scottsdale, surely he has experience the occasional cold, steady rain like Friday.

“The weather is so good here, when the weather is like this we don’t play,” Laird said. “I really don’t remember a day where it’s just been that kind of drizzle. It was a very Scottish day today. We get rain, but it’s not sort of an all-day thing.”

Look a little further down the leaderboard, and the absence of golf’s two biggest names – Woods and Mickelson – was another reminder that the sport is in the midst of a generational shift, assuming it hasn’t already happened.

Berger and Thomas are proudly part of the class of `11 – that’s high school, not college.

They played often together as juniors and at college – Berger at Florida State, Thomas at Alabama. Berger made it through Q-school after two years of college and easily earned his card through the Web.com Tour. Thomas did the same after leaving Alabama.

Not too far back was Canada’s Graham DeLaet. He scrambled his way to a 70 and was six shots behind.

Woods either stubbed his chips or bladed them, the worst of it coming from behind the fourth green. He had 35 feet to the flag, tried to hit a baby flop shot and sent it 47 yards away, leading to a double bogey.

Mickelson steadily dropped shots, tried to rally with a birdie on the 15th that put him one birdie away from making the cut, and then hit his tee shot in a bunker on the 17th that led to bogey. That bunker wasn’t even in play for Mickelson on Thursday, but the weather was such that players were hitting two or three clubs more.

Fifteen players failed to finish the round before darkness. That included Arizona club pro Michael Hopper, who had no chance of making the cut. With two holes to play, he was at 12 over and needed to finish two pars to beat Woods.

And that would be another personal-worst for Woods. He has never finished last in a PGA Tour event.