Laird redeems himself in playoff to win again in Las Vegas; Gligic top Canadian at T27 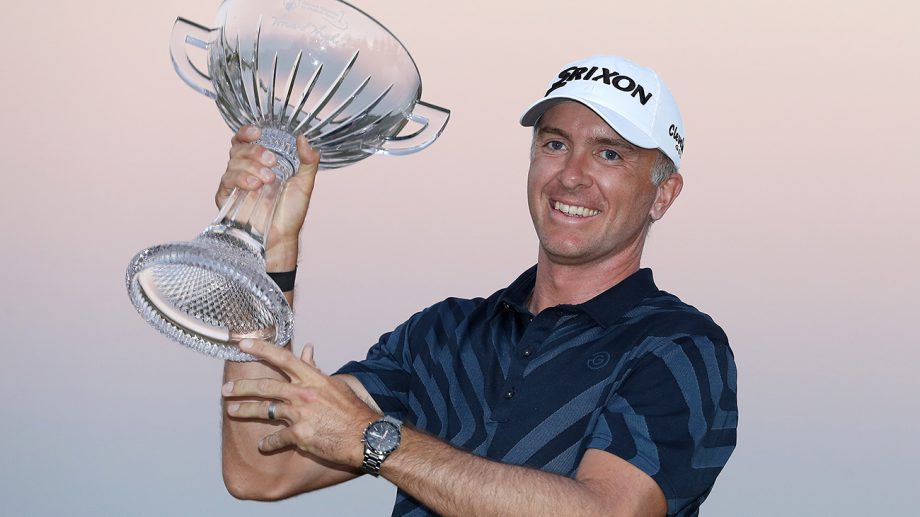 LAS VEGAS – Martin Laird lost a chance to win by making bogey on the 18th hole, only to redeem himself in a three-way playoff by making a 20-foot birdie putt on the second extra hole Sunday to win the Shriners Hospitals for Children Open.

Laird ended seven years without a victory in a year filled with so much doubt, which included knee surgery right about the time golf was set to resume from the COVID-19 pandemic.

He needed a sponsor exemption to play the tournament he won in 2009. He ended it with a birdie to beat Matthew Wolff and Austin Cook. It was the third three-man playoff in Las Vegas for Laird, who won in 2009 and lost the following year when Jonathan Byrd made a hole-in-one on the 17th hole at the TPC Summerlin.

Laird contributed a pair of big shots on the par 3.

He had a one-shot lead with two holes to play Sunday when he sent his tee shot on the par-3 17th off a cart path and some 30 yards right of the green with the pin to the right. He hit a chip-and-run over the cart path, under the trees, between a pair of bunkers and then made a most improbable par with an 18-foot putt.

They all made par on the 18th in the playoff, and then Laird ended it on the 17th with his birdie. Laird, at No. 358 in the world, becomes the third winner in the last four regular PGA Tour events to be ranked outside the top 300.

Now he has a two-year exemption, and he’s headed back to the Masters in April and the PGA Championship in May.

Laird appeared to have everything going his way when he caught a buried lie near the lip of a bunker while facing a front pin on the par-5 ninth. He blasted away, turned his head and looked back to see the superb shot trickle into the cup for eagle. That gave him a three-shot lead heading to the back nine.

But he couldn’t hold it.

Cook never really went away, closing within one shot with a 40-foot birdie putt on the 17th and burning the edge of the cup on his birdie attempt on the closing hole. Wolff was never far away and arrived in a powerful burst with a two-putt birdie on the reachable par-4 15th, blasting a 375-yard drive on the par-5 16th and stuffing wedge to 10 feet for eagle.

Laird never lost the lead, though he was grinding to the finish line. He had to make a 15-foot birdie putt on the 15th, the easiest hole at TPC Summerlin. He played away from the flag and water on the par-5 16th to 70 feet and came up 15 feet short, leading to a three-putt par.

And then he made his great escape on the 17th after a tee shot off the cart path. A par on the 18th was all he needed for the victory, and he hung it out to the right, down to a collection area with a drain a yard in front of his ball.

Patrick Cantlay, who shared the 54-hole lead with Laird, was the biggest surprise of the day. Cantlay won the tournament in 2017 and was runner-up each of the last two years. Fourteen of his 15 rounds at the TPC Summerlin were under par. He opened with four bogeys in six holes and didn’t make birdie until the 13th, closing with a 73.

U.S. Open champion Bryson DeChambeau closed with a 66, and that was the worst he could have done. With a helping wind, he played the par 5s on the back nine in 1 over. He also bogeyed the last from a bunker.

He tied for eighth in his first appearance since becoming a major champion at Winged Foot, and he now goes back to the lab – or the gym, in his case – for the next month before resurfacing at the Masters.

Abraham Ancer birdied the last two holes for a 67 to finish alone in fourth. Will Zalatoris closed with a 69 for a three-way tie for fifth, leaving him just short of enough FedEx Cup points to earn special temporary membership on the PGA Tour. His next chance is in three weeks in Bermuda.

Michael Gilgic of Burlington, Ont., finished tied for 27th place at 14-under. Adam Hadwin of Abbortsford, B.C., finished in a nine-way tie for 34th at 13-under.