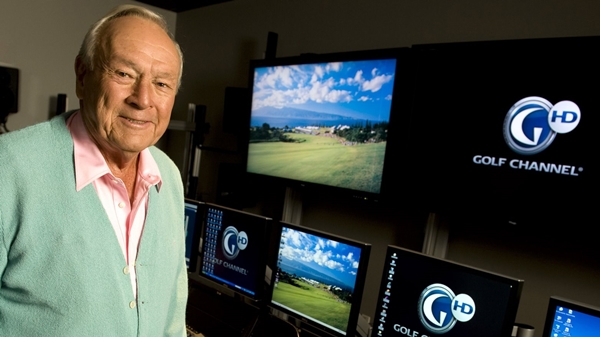 HONOLULU – Twenty years ago on Saturday, Arnold Palmer flipped a ceremonial switch to launch a risky venture that cynics saw as an easy punch line.

Tennis magazine mocked the idea as “24 hours of chubby guys in bad clothes speaking in jargon that only they understand.” Rick Reilly, in his column for Sports Illustrated, suggested programming that included “Body by Jack,” a workout session with Jack Nicklaus in which he “takes you through a 30-minute routine you can do without getting out of the cart.”

Even the players had their doubts.

“I’m always stunned that there’s enough golf stuff for 24 hours a day,” Paul Goydos said. “I would have thought, `Do we really need a Golf Channel? Is there enough viewership? Enough material?’ I thought it would be a tough row to hoe, in my opinion. They’ve proven me wrong.”

“That’s all I watch,” Jason Day said. “I say I don’t watch much golf, but I do. Pretty much every day I’m watching Golf Channel.”

Twenty years later, Golf Channel can be seen in roughly 120 million homes in 83 countries and is broadcast in 12 languages around the world. Its offices in Orlando, Florida, have more than quadrupled to 160,000 square feet.

And there is no shortage of programming.

“It’s a big deal,” Palmer said Friday morning from his office at Bay Hill. “Everybody is excited and happy with the channel and all the stuff going on. Who would ever thought 20 years ago … all the things that have happened with Golf Channel?”

Palmer was a co-founder with TV mogul Joe Gibbs, who plans to make an appearance on Golf Channel on Saturday to commemorate the anniversary. Golf Channel began 18 months before Tiger Woods turned pro, so it was blessed with good timing. Comcast eventually bought out the network, and then acquired NBC Universal, which gave Golf Channel even greater resources and branding capabilities.

The most significant moment in its 20 years was when the PGA Tour signed it to a 15-year deal in 2006 that gave Golf Channel rights to Thursday and Friday rounds from the PGA Tour, along with full tournament coverage for the opening three events and the tournaments in the fall. Golf Channel previously had the European Tour and other global events, along with the other three U.S. tours (seniors, women and what is now Web.com).

But there was another turning point equally important in the infancy of the network, a time when even Palmer had his doubts about the future. The question was whether it was prudent for Palmer and his investors to get out and cut their losses.

“We were questioning what we were doing and the viability of what was happening,” Palmer said. “And they said, `How do you feel?’ I said, `Let me say this to you: If I didn’t try to hit it through the trees a few times, none of us would be here.'”

The quote is now on a wall at Golf Channel headquarters, a daily reminder that when you hitch up your pants and go for broke, the reward can be immense.

“Even though we’re now part of a big company, you still want the spirit of how this place was founded to be a living, breathing part of what makes it tick,” Golf Channel President Mike McCarley said. “That culture and everything Arnold represented, that should be part of it.”

McCarley said Golf Channel now is the most affluent network of those devoted to a sport, mainly because of the demographic of those watching.

Davis Love III smiled at the coincidence that a network co-founded by Palmer would benefit from the arrival of Woods, the two players who in different ways made golf appealing to the masses.

“It’s make a big difference for our sport,” Love said.

Golf Channel has kept the newspaper clippings from two decades ago that either panned the idea of a golf channel or predicted failure.

“That was an easy column to write,” McCarley said. “It was the first of its kind. Now every sport has its own network.”

Geoff Ogilvy of Australia was among the skeptics. He remembers when he first came over to America to play in events like the Western Amateur and the Porter Cup. Golf Channel was just getting started.

“Coming from Australia, we had four channels and we didn’t have any cable,” Ogilvy said. “I thought this was cool, but no chance anyone was going to watch. They had all these infomercials, like Orlimar Trimetal. Remember that? So I was like, `Who’s going to watch this?’ But in the last 10 years when they got the tour deal, I think it really kicked on. Now it’s a legitimate channel – really legitimate.

“ESPN was the same,” he said. “I remember when they started, they showed Aussie Rules football because it was the only thing they could afford. ESPN only got there when they started showing real sport, and Golf Channel is probably the same. It’s a big channel now. It’s a big part of our tour.”

How far has Golf Channel come?

There are sheer numbers. Golf Channel had the rights to 23 domestic tournaments when it began (mostly the LPGA and Nike tours) and 41 events from Europe, South Africa and Australia. This year, it will televise 189 events from the major tours around the world. It began with 180 employees and now has nearly 700; McCarley said 13 employees have been there from the start.

And there are intangibles. On the day before it celebrated its 20-year anniversary, Palmer watched his grandson, Sam Saunders, compete on the PGA Tour on a network that he helped to start.