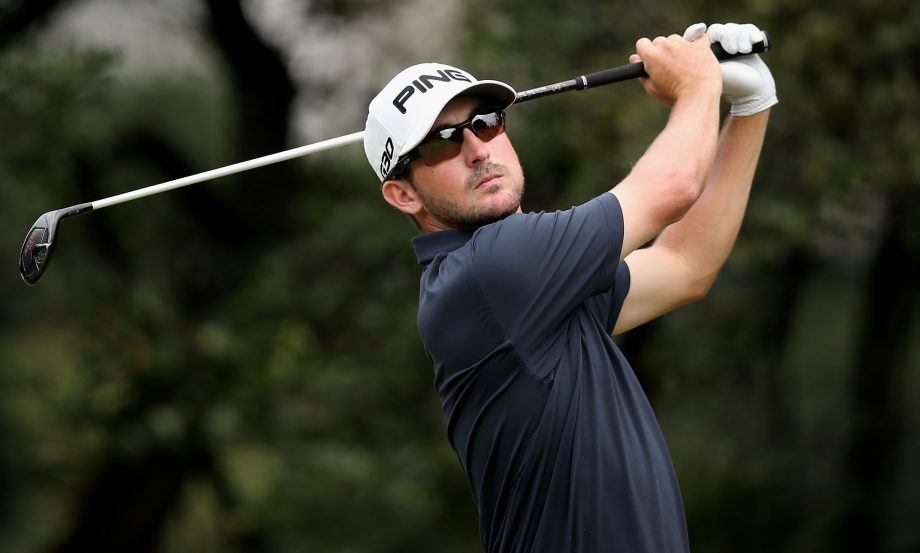 Andrew Landry put five birdies on the card before his only mistake at the par 5 17th. He’s one in front of D.H. Lee. (Friedemann Vogel/Getty Images)

Brasil Champions presented by HSBC winner Peter Malnati is at 7-under 135 and tied for fourth place with Texan Mark Walker (65) and Michael Arnaud (64) of Louisiana.

Ten more players are knotted together at 6-under 136, including Harold Varner III (67), 2013 U.S. Amateur runner-up Oliver Goss (67) and recent Illinois grad Brian Campbell (66), who turned pro after qualifying and finishing T27 at the U.S. Open two weeks ago.

“It was another good round,” said Landry, who lives in Austin, Texas. “It was one of those days where I had a lot of good looks and made a lot of great putts.”

For the second straight day, Landry rolled in a monster birdie putt from about 60 feet, this one from the fringe on the par-3, 8th hole.

“My speed has been just awesome this week,” he said. “You can’t mess things up when your speed is on.”

Lovemark’s 7-under 64 matched was the best of the day, and later matched by Arnaud and put the former All-American from Southern California into contention.

“I feel good going into the weekend,” he said. “If I keep being aggressive and continue to drive it well, I should be able to give myself a bunch of chances.”

Lovemark is also handling the greens at the Ashburn Golf Club, witness his 54 total putts for two days rank him number two in the field.

Canadian Ryan Yip shot a 6-under 65 today to make the cut. He will be joined by Team Canada Young Pro Adam Svensson who carded a 2-under 69 and Eugene Wong who posted a 1-under 70.

Brad Fritsch narrowly missed the cut by a single stroke after rounds of 72 and 70. National Amateur Team member Austin Connelly finished 2 strokes shy of the cutline after a round of 68 yesterday. Canadian Young Pro member Taylor Pendrith also finished 2 back of the 1-under cutline.