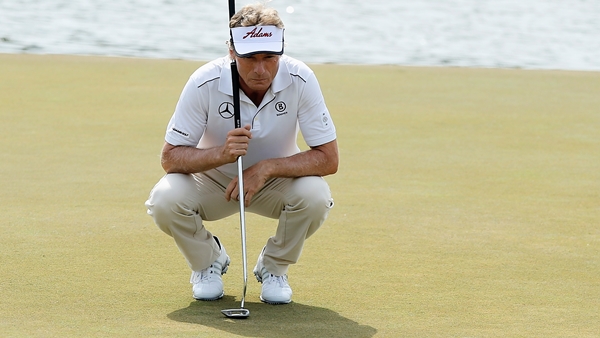 THE WOODLANDS, Texas – Bernhard Langer birdied the final six holes for a share of the lead with Bart Bryant on Friday in the Champions Tour’s Insperity Invitational.

Langer matched Bryant at 6-under 66 at The Woodlands Country Club. Langer won the 2007 event at Augusta Pines and successfully defended his title in 2008 at The Woodlands. The 56-year-old German player won the season-opening event in Hawaii for his 19th Champions Tour title and has 20 straight under-par rounds.

Defending champion Esteban Toledo was a stroke back. Last year, he became the first Mexican winner in Champions Tour history, beating Mike Goodes with a par on the third hole of a playoff.

Woodlands resident Jeff Maggert, Fred Funk and Joe Daley shot 68. Maggert won in Mississippi in March in his first start on the 50-and-over tour. Fred Funk won the 2012 event and the 1992 Houston Open on the course.

Fred Couples, the 2010 winner and a former University of Houston player, had a 69. He won in March in Newport Beach, Calif.

Two Canadians are in the field this week in Texas. Rod Spittle opened with a 1-under 71 and is tied for 20th. Jim Rutledge was a shot back of his Canadian counterpart after an even par 70. He’s tied for 30th.