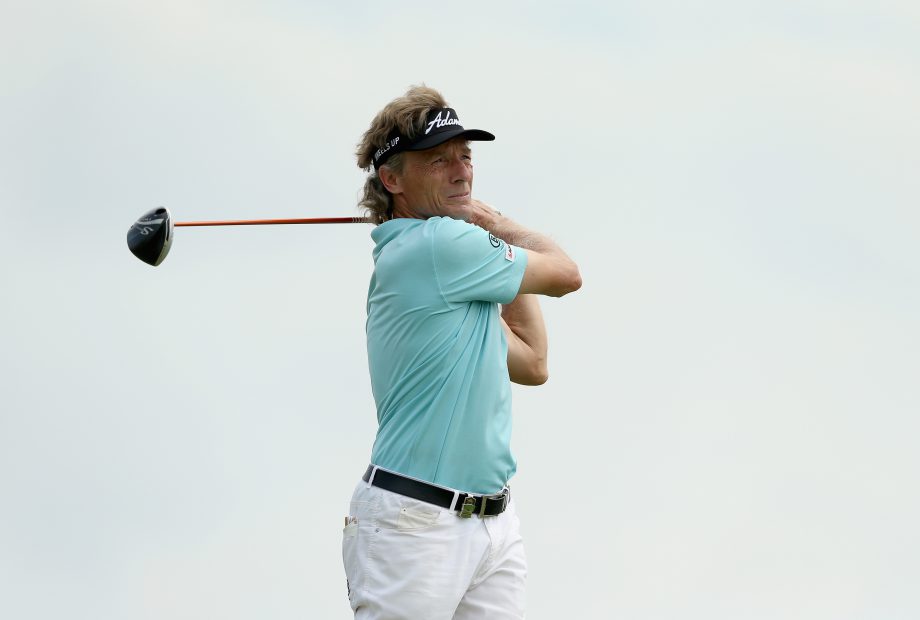 BELMONT, Mass. – For about 10 minutes on the front nine in the fourth round of the Senior Players Championship, Bernhard Langer was almost in trouble.

The defending champion three-putted on the third hole at the Belmont Country Club – his first bogey in 48 holes – and the eight-stroke lead he had to start the day was down to six. But he eagled the next hole, then coasted to a six-stroke victory in the third Champions Tour major of the year.

“I enjoy playing with a big lead. But you’ve still got to pay attention. It’s not like it’s over,” said Langer, who claimed $405,000 and moved into second on the tour standings. “You just never know what happens. This game is so amazing: It’s brutally tough when things go bad, and enthralling and thrilling when things go right.”

A two-time Masters champion who won five times on the Champions Tour last year, Langer was winless this year before going wire-to-wire to earn his fifth major on the over-50 circuit. He is the first golfer since Arnold Palmer win in 1984 and ’85 to successfully defend his title in the Senior Players.

“It was a magical week,” Langer said. “Obviously, to do something that Arnie did is amazing.”

Kirk Triplett shot 64 – a score that would have been good enough for a course record at the beginning of the week – to finish six strokes back at minus-13. Starting the day 10 strokes back, he birdied six of seven holes around the turn to win the only competitive battle: for second place.

“I thought: `If I make six more birdies, Bernhard’s going to be nervous,'” he joked. “It’s not the first time this guy’s done this. … Most of us didn’t get out of the gate enough to stay with him.”

Senior tour points leader Colin Montgomerie shot 68 on Sunday to finish in a tie for third after spending the morning at Massachusetts General Hospital being checked out for chest pains. Doctors cleared him in time to get him back to the course for a 1:09 p.m. tee time despite a detour or two to get around a closed bridge downtown.

“I blame the British for building the roads,” the 51-year-old Scotsman said. “Bloody awful.”

Montgomerie earned 322 points in the Charles Schwab Cup standings and has 1,616 for the season – 172 more than Langer, who moved up to second. Russ Cochran (69) and Joe Durant (67) were also in the three-way tie for third.

“Best of luck to Bernhard,” Montgomerie said. “One day it will stop – hopefully sooner than later. But he’s amazing, and all credit to him.”

Langer shot matching 65s in the first two rounds at the par-71, 6,812-yard course and then added a 67 on Saturday to open an eight-stroke lead over Cochran heading into the final round. A bogey on No. 3 might have opened the door, just a bit.

But Langer then put his second shot on the par-5 fourth hole about six feet from the pin, and knocked it in for an eagle. The 57-year-old German earned his 24th victory on the Champions Tour, tying him with Miller Barber for fourth all-time.

“Playing next to Bernhard, he’s pretty solid,” Cochran said. “It just proves that if you want to win out here, you’ve got to do all things.”