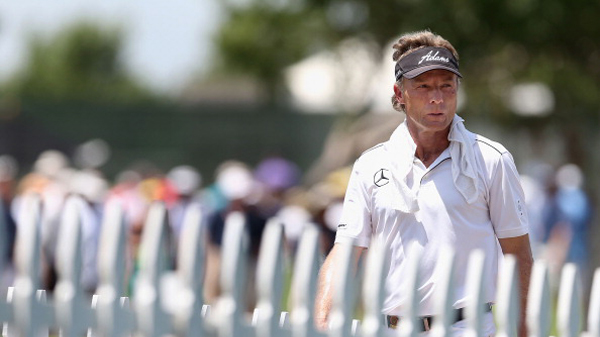 BRIDGEND, Wales  — Bernhard Langer made a statement of intent when he opened with a 6-under-par 65 to take a two-stroke lead over American Bob Tway in the British Senior Open at a sweltering Royal Porthcawl on Thursday.

Langer, who threw away a two-stroke lead on the final hole at Royal Birkdale last year and then was beaten for the title in a playoff, was out in a best-of-the-day 31.

He birdied the third, fourth, sixth and eighth holes, and went 5 under when he birdied the long 13th. He dropped a shot at the 16th but then hit back immediately with birdies at the two closing holes.

“Six under is very satisfying,” Langer said. “I played smart, some good, some great.

“I kept it out of the bunkers and out of the hay, and gave myself some opportunities. And I’m pleased with a birdie-birdie finish.”

Langer is trying to add a second British Senior title to the one he won at Carnoustie in 2010.

Tway set the early target at 4-under 67, with birdies at the first, sixth, 12th and 13th, and no dropped shots.

“It was a pleasure to play a nice round of golf on a great golf course,” Tway said. “I probably should have bogeyed a couple of holes coming in, but I got lucky.”

Chris Williams of England was alone in third on a bogey-free 68 with birdies at Nos. 2, 4 and 6, while Andrew Oldcorn of Scotland was a stroke behind in fourth. Spain’s Pedro Linhart and Canadian Rick Gibson were tied for fifth on 70.

Mark Wiebe, who beat Langer in last year’s playoff and played with him in the first round, carded 5-over 76.

Colin Montgomerie, bidding for his third successive seniors’ major, was on 74 with just two birdies, and three dropped shots.

Tom Watson had a roller-coaster front nine of 1-over 36, steadied the ship for five holes after the turn, then dropped three strokes on successive holes before birdieing the last for a 3-over 74.

The winner at Royal Birkdale two years ago, Fred Couples, was out in 39 after a triple-bogey eight at the long sixth, but stormed back with a birdie-eagle-birdie run from the 12th to get back to level, dropped a stroke at the 16th, and birdied the last to be back in 32 for a par 71.

Calgary’s Rick Gibson and Rob Spittle of St. Catherine’s, Ont. are representing Canada in the Senior Open, and shot 70 and 76 respectively in the opening round.