Langer, Maggert share lead after 3rd round of US Senior Open 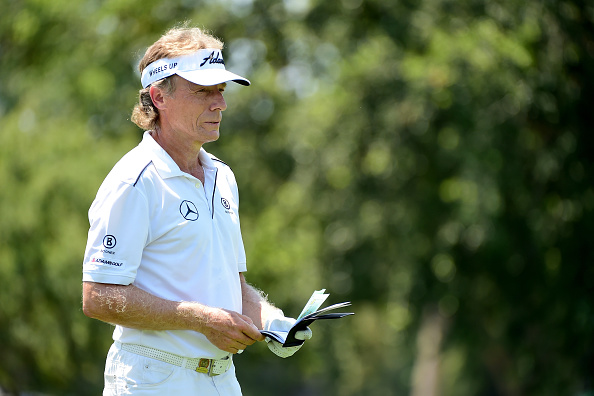 SACRAMENTO, Calif. – The crammed leaderboard at the U.S. Senior Open has some familiar faces heading into the final round and one notable name nobody expected to challenge for another major.

Bernhard Langer and Jeff Maggert shared the lead at 5-under 205 at Del Paso, where conditions cooled off Saturday after consecutive days above 100 degrees. But the competition remained hot, with eight players one shot off the lead, including 65-year-old Tom Watson and defending champion Colin Montgomerie.

“It’s like a horse race,” Watson said. “Getting close to the wire.”

Watson, who was tied with Maggert and Peter Fowler through 36 holes, salvaged a 71 after making a 20-foot par putt on the 18th hole that sent the gallery into a roar. Montgomerie had a 70, and Kenny Perry surged into contention with a 64.

“The only way to separate yourself is by playing great golf,” said Langer, who should feel comfortable in this position.

Langer and Montgomerie have combined to win six of the previous seven senior major championships. Maggert had the other victory during that stretch earlier this year at The Tradition, where Perry won in 2014.

“I’m kind of getting sick of seeing them, actually, especially on top of the leaderboard,” Maggert said. “But it does seem to be a pretty constant theme out there.”

The lone contender nobody saw coming is the Hall of Famer who has made a career of winning on golf’s biggest stages.

It’s just been a while.

“I don’t know what that will require me to do, but I hope that I’m within a body length of the leader – if there’s a leader out there,” Watson said.

Each leader took a different route through 54 holes.

Nobody more than Perry, who came out of nowhere with six birdies on his front nine – tying a nine-hole event record with a 28 – and before shooting par on his back nine. Perry, who began the day seven shots off the lead, was so far out of contention he started his round on the back nine under the split-tee setup.

“I felt like I was playing a round of golf with my buddies. Just very relaxing, didn’t have much spectators,” Perry said.

Now he’ll try to complete another huge comeback in this championship in front of a crowd.

Perry rallied from 10 strokes behind after 36 holes to win the 2013 U.S. Senior Open in scorching heat at Omaha Country Club. He turned in finals rounds of 64 and 63 for a five-stroke victory.

“I know I did it once. Hopefully, I can do it a second time,” Perry said.

Montgomerie shot 2 under on his front nine before giving it back after the turn. Maggert made three birdies and three bogeys, including on the 18th for a chance to take sole possession of the lead. And Langer looked comfortable again with his usual caddie, Terry Holt, back on the bag for him.

Holt sat out the first two days recovering from a reaction to a spider bite on his leg. Bobby Siravo, a Del Paso member and former professional golfer, caddied for Langer on Thursday and Friday.

Langer’s long putter carried him again, including a 25-foot birdie on No. 13. But his approach on the 18th landed in the long, lush rough below the green, and he missed an 8-foot putt to save par.

Even still, Langer has been as good as anybody on the Champions Tour in this spot.

The 57-year-old German won his second straight Senior Players Championship two weeks ago. And he has won five senior majors, which is tied for fifth most.

Just don’t call him – or anybody – a favorite Sunday.

“You’ve got to try and avoid mistakes and make some putts and hit some incredible shots,” Langer said. “It’s the only way to really separate yourself.”

Canadian Stephen Ames posted a two-over-par 72 in the third round.