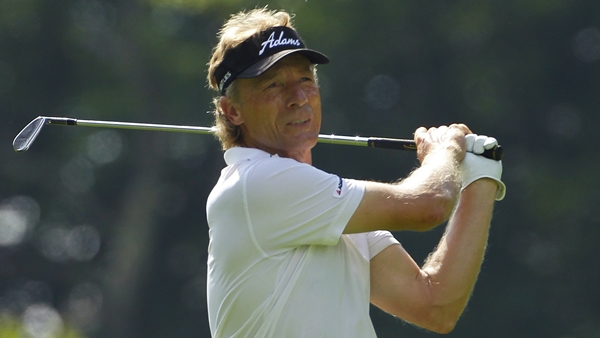 PITTSBURGH – Bernhard Langer spent 45 anxious minutes Friday night wondering if the driver that he has used the last two years would be healthy enough to make it to work Saturday.

Fortunately, a Champions Tour club technician was able to find a replacement screw for the one that busted inside the clubhead at the end of Langer’s second round at the Senior Players Championship.

The “gamer” back in his ever steady hands, Langer moved closer to his third major title on the 50-and-over circuit, overcoming a slow start to shoot a 4-under 66 in the third round and stay in front of hard-charging Kenny Perry at Fox Chapel.

“There’s always slight doubts,” Langer said. “You’re putting something together. They say it’s the same, but you’re never sure it’s the same … I was convinced it was very close to the same. You don’t want it to get into your head.”

It hardly looked like Langer was bothered while moving to 15-under 195 through 54 holes at an event where he has five top-10 finishes but no victories. The two-time Masters hit 10 of 14 fairways and shot a 4-under 31 on the back nine to regain control after briefly losing the lead to Perry.

Perry, trying to join Arnold Palmer as the only player to win the Senior Players in consecutive years, was three behind after a 65 he allowed could have been even better. Still, the deficit is hardly daunting for Perry, who trailed Fred Couples by two heading into the final round last June only to emerge with the first major of his professional career.

“Hopefully, the results will be the same,” Perry said, laughing.

Russ Cochran, Joe Durant and Bill Glasson were four back. Cochran had a 63, the low round of the day. Durant shot 67, and Glasson had a 68.

Jeff Sluman was at 10 under following a 64 as the field began to spread out behind Langer.

While Langer’s driver was just fine when he walked to the first tee on Saturday, everything else in his game looked shaky early on. The 56-year-old German three-putted the first hole for bogey and couldn’t get up and down for par from a greenside bunker on the fifth.

With Perry rocketing up the leaderboard in front of him, the unflappable Langer regained control of the tournament.

A 30-foot birdie from the back of the green on the par-4 sixth got him going and he backed it up with another birdie on the seventh to bring him back to even par, setting the stage for the strong back nine. After finding himself one shot behind Perry at the turn, Langer put on a clinic. He birdied the 12th then ran off three more birdies from Nos. 14-16, all of them on putts inside 15 feet.

Langer has been one of the most dominant players on the Champions Tour since making his debut in 2007. He has won 20 times since turning 50, including the Senior British Open and the U.S. Senior Open in 2010. He has challenged frequently at the Senior Players, where he’s never finished worse than 13th in six starts, including a tie for eighth behind Perry last June.

This time Langer finds himself in the role of leader, but he’ll have an eyeful of Perry on Sunday after the streaky Kentuckian put together another scorching round at the par 70 layout.

Perry bounced back a methodical 70 in the opening round with a 63 on Friday. He followed it with a roller-coaster 65 that included six birdies, an eagle and three bogeys.

A birdie on No. 14 seemed to have Perry poised for his second straight 63, but he cooled over the closing stretch, bogeying the 16th after his tee shot landed against a tree. Playing into the wind on the uphill par-5 18th, he settled for par, leaving himself and the rest of the field with some work to do to catch Langer.

Not that Langer is taking anything for granted.

“I still have got to shoot under par tomorrow,” he said. “I feel Kenny Perry is going to go under par. There’s still 18 holes to play. That’s a lot of golf.”

Maybe, but Perry knows Langer isn’t going to come back to the pack. Perry estimated it would take a 63 to make things interesting on Sunday. Anything less could turn the round into a victory lap for his good friend.

“If he kicks my butt, I’ll shake his hand, give him a hug, whatever,” Perry said. “We’re going to go out and compete and see where the chips fall.”