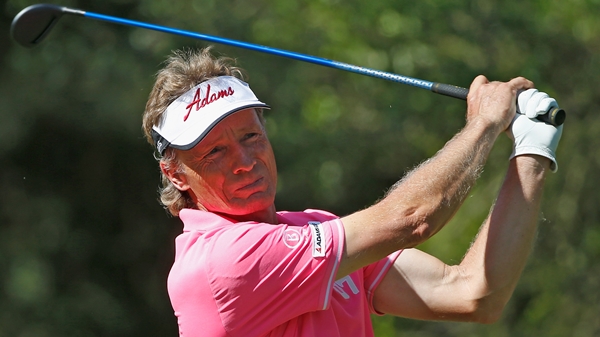 THE WOODLANDS, Texas -Bernhard Langer shot a 4-under 68 on Saturday to open a three-stroke lead in the Champions Tour’s Insperity Invitational.

Langer had a 10-under 134 total at The Woodlands Country Club.

The 56-year-old German player won the 2007 event at Augusta Pines and successfully defended his title in 2008 at The Woodlands. He won the season-opening event in Hawaii for his 19th Champions Tour title.

“Every win is a thrill and it’s exciting,” Langer said. “I’m not sure I’ve ever won any other tournament three times. That would be a first and it would be a lot of fun.”

Colin Montgomerie was second after a 66, the best round of the day. He eagled the par-5 13th.

In his second year on the tour, Montgomerie’s best finish is a second in March in Newport Beach, California.

Montgomerie is hoping to get the upper hand over “good friend” Langer when they’re grouped together Sunday.

“I’ve been trying all bloody year to do it and I’ve not done it yet,” he said. “Not many people have, to be honest. But he’s playing some superb golf and it’s nice to have an opportunity anyway tomorrow to give it another go and see if I can win out here.”

Defending champion Esteban Toledo, Gary Hallberg and Bart Bryant were four strokes back. Hallberg had a 67, Toledo shot 71, and Bryant – tied for the first-round lead with Langer – had a 72.

Fred Couples, the 2010 winner, was tied for sixth at 5 under after a 70. The former University of Houston player won the Newport Beach event.

Rod Spittle climbed eight spots up the leaderboard Saturday after a 2-under 70. The St. Catharines, Ont. native is sitting at 3-under 141 and tied for 12th with four others including Bob Tway and Jeff Maggart.