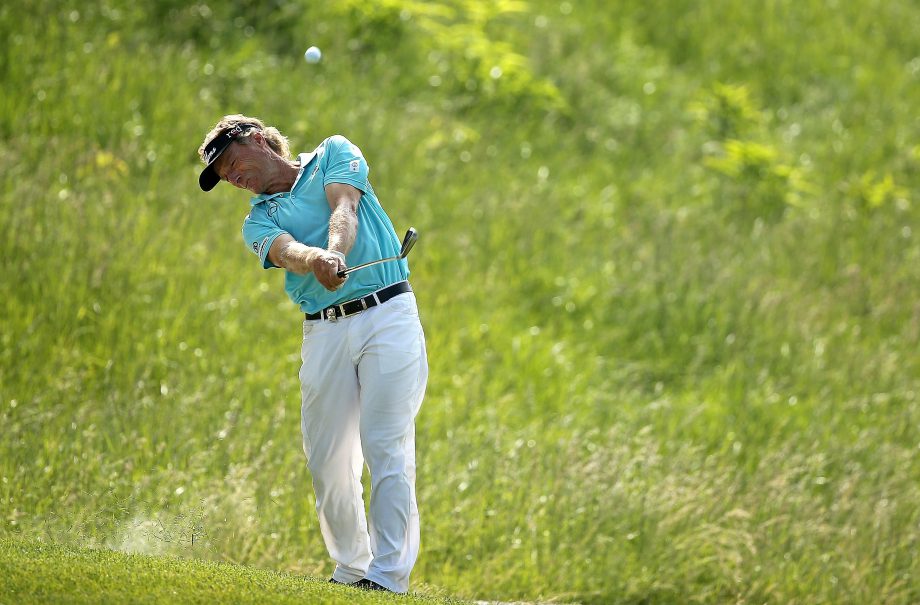 BELMONT, Mass. – Bernhard Langer wasn’t sure what to expect from unfamiliar confines on Thursday, but that didn’t keep him from making history.

The two-time Masters champion shot four birdies on the final five holes to tie a course record with a 6-under-par 65 in the first round of the Senior Players Championship.

“I was watching the leaderboards and I saw a bunch of 3 and 4 unders so I figured that must be doable,” said Langer, who was playing the par-71, 6,855-yard course at Belmont Country Club for the first time.

Afternoon wind gusts made for difficult playing conditions on an otherwise pleasant day, but that didn’t seem to bother Langer.

Langer bogeyed twice on his first nine holes, but still carded a 2-under 34 at the halfway point. After opening the back nine with four straight pars, Langer charged up the leaderboard with back-to-back birdies on Nos. 14 and 15 and finished with two more on Nos. 17 and 18.

It wasn’t until the 17th hole that Langer took sole possession of the lead. On the par-4 18th, his tee shot landed in the rough, but a hard wedge swing placed the ball three yards from the hole for an easy putt.

A victory this weekend in Belmont would give Langer his second consecutive Senior Players title, something no golfer has done since Arnold Palmer in 1984-85.

“It’s still early in the week so I’m just trying to not shoot myself in the foot and be in contention,” said Langer.

Guy Boros, Lee Janzen, and Rocco Mediate finished the round in a three-way tie for second at 4-under 67.

Boros, whose father Julius won the 1963 U.S. Open at The Country Club in nearby Brookline, birdied three of his final six holes to put himself in contention.

“I didn’t hit it great,” Boros said. “I putted pretty well, so I made a lot of good par putts and I two-putted twice for birdie. I hit some good, some bad, so it was kind of all over the place.”

Janzen, a two-time U.S. Open champion who qualified for the tournament again on Monday, birdied five of his first nine holes while Mediate, best known for his second-place finish after a battle with Tiger Woods in the 2008 U.S. Open, began the day with three birdies on his first four.

“Golf course is fantastic,” Mediate said. “It just keeps you on your toes really. I missed a few fairways today by feet, a couple of feet and it was nasty.”

Charles Schwab Cup points leader Colin Montgomerie is three shots off the lead, and tied for fifth at 3-under-par 68.

“I’m not quite comfortable yet,” Montgomerie said. “You play defense a wee bit around here and you’ve got to position your ball and it’s playing chess the with course sort of thing.”

The Senior Players is the third of four Champions Tour majors and the 12th of 25 events the season, marking the tour’s unofficial halfway point.