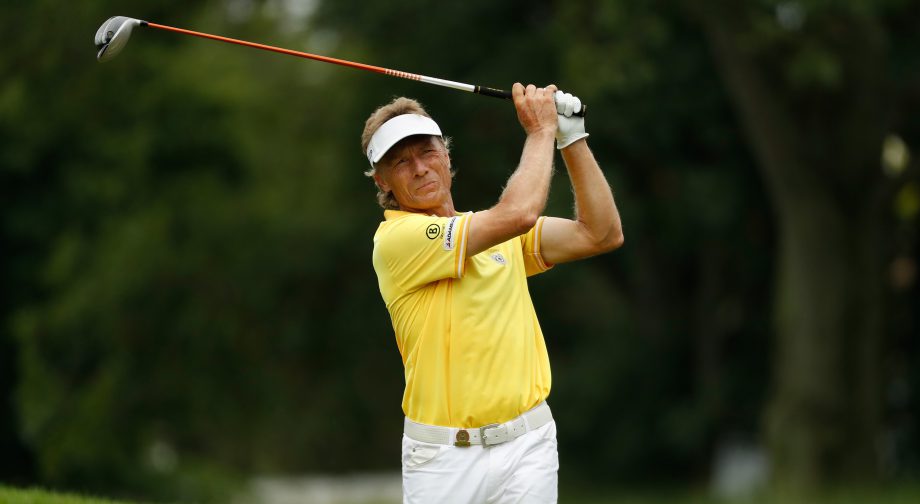 SNOQUALMIE, Wash. – By the time Bernhard Langer made the turn in the final round of the Boeing Classic, he was five shots out if the lead. At one point Sunday he was tied for 14th after not finishing lower than 13th in any tournament this year.

A few hours later, Langer had outlasted Kevin Sutherland and Woody Austin in a playoff and was celebrating his fourth PGA Tour Champions victory this season and 29th overall on the 50-and-over tour.

“I blew tournaments when I had a lead and I’ve come from seven behind, so you just never know,” Langer said.

It took a special stretch for Langer to recover from a shaky front nine where he needed a few lengthy par putts to stay on the edge of contention. Langer went out in 1-over 37, but played the back nine in 6-under 30, also making birdies on Nos. 10-13 and 15.

“When he gets hot with that broom,” Austin said in reference to Langer’s putter, “you can’t beat that broom.”

Langer took advantage of Austin and Sutherland both finding bunkers on the 18th in the playoff. Sutherland ended up in a bunker off the tee, while Austin’s second to the par 5 found a greenside bunker. Langer’s second shot landed 10 yards short of the green and he nearly chipped in for eagle before making the birdie putt to win.

“You need to be precise and have the nerve and play the golf course the way it needs to be played,” Langer said. “There’s still a little bit of life left in me.”

Gene Sauers, the second-round leader and U.S. Senior Open winner two weeks ago, shot a 72 to finish a shot out of the playoff. Sauers started his day with two straight birdies to reach 14 under. But he struggled on the back nine, bogeying three of the first five holes and allowed the chase group to catch up. Sauers was still in contention until making bogey at the 17th after his tee shot came up short. Sauers made birdie at the 18th to finish alone in fourth.

While Langer rolled through the back nine, Austin was hot on the front nine going out in 32. His first mistake of the round came at the 15th when he went for the green in two on the par 5 unaware he was in a tie for the lead because electronic scoreboards on the back nine were not working. Austin found a bunker and ended up making bogey.

“I would have laid up to the right for sure, absolutely, no question,” said Austin, who birdied Nos. 17 and 18 to get into the playoff.

Sutherland started the day seven shots behind Sauers and made eight birdies with no bogeys in his round. Sutherland was attempting to win his first stroke-play tournament on either the regular or senior tour.