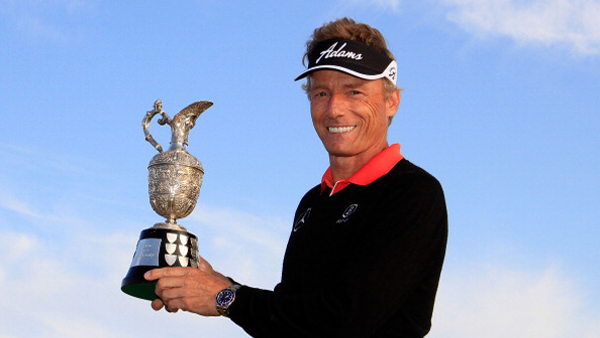 Langer’s 13-stroke win is the largest margin of victory in a senior major, beating Hale Irwin’s 12-stroke win in the Senior PGA Championship in 1997, while he almost doubled Bob Charles’ record of seven strokes in the British event, set at Turnberry back in 1989.

Montgomerie shot 2-under 69 to finish at 5-under 279 after starting with a share of seventh place.

Tom Pernice Jr. of the United States, Barry Lane of England and Rick Gibson of Canada were three further shots back, tied for third on 2-under 282.

“The golf course is unbelievably tough,” Langer said. “To have this weather for four days is unreal, it’s like playing in Florida with a bit of wind.

“The secret was I didn’t make too many mistakes and my driver was very good and my long putting was excellent, although not quite today as I was lacking a little. Perhaps my lead was too big.”

While the stiff breeze sent many scores soaring, Langer displayed the same immaculate control that saw him lead throughout, going into the final day eight strokes ahead of Gibson.

Langer birdied both the second, when he holed from eight feet, and the third from five feet. He dropped a shot at the fourth when his approach only reached the front edge and he putted up to three feet and missed.

He left his eagle putt at the long sixth on the lip, then bagged his fourth birdie at the seventh. He moved 14 clear when Gibson had a bogey at the 10th, but then Langer missed his par putt at 11, in what was only his fifth bogey of the week.

Langer claimed his fifth birdie of the day at the short No. 12, then posted five straight pars before finding the final green in two and two-putting for a closing birdie, his 23rd of the tournament.

Montgomerie’s closing 69 saw him win what he called “the other competition.” He dropped two strokes early on but then birdied the sixth and eighth to be level at the turn. He parred seven holes on the run from Nos. 9 through 16 before birdies at the last two to move clear of the rest of the chasers.

Gibson, second overnight, struggled on the final day, closing with a 4-over 75 while Pernice and Lane shot 70 and 72 respectively.

Americans Bob Tway (76) and Scott Dunlap (75) shared sixth place on level par 284, one ahead of Argentina’s Miguel Angel Jimenez (68) and Kirk Triplett (70) of the United States.

Tom Watson and Fred Couples struggled on the final day. Watson posted a 6-over 77 with fellow American Couples one worse, to finish on 286 and 288 respectively.

Watson finished in a share of 10th alongside countryman Russ Cochran. Couples was tied for 13th.

Also representing Canada on the field was Rod Spittle who claimed a 21st place finish carding 70 in the final round, and 291 for the tournament.