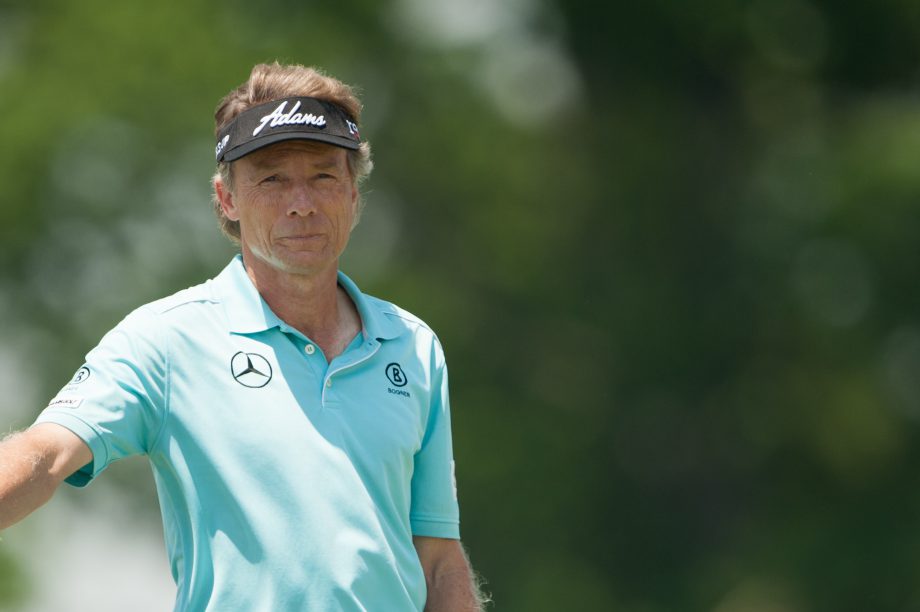 “This is very much a Bernhard Langer-type of golf course,” Parnevik said he remembered thinking.

Langer has proved him right, posting a second consecutive 6-under 65 Friday in what he called a “stressless” bogey-free round that gave him a four-shot lead halfway through the Senior Players Championship.

“Somebody said, `That’s pretty boring stuff: 65, 65,'” Langer said after hitting all but one green in regulation. “I don’t think it is. I’d like to do it every day.”

Russ Cochran’s slump-busting 65 left him alone in second, while Steve Pate set a course-record with a bogey-free 63. That put him in a three-way tie for third and six shots back with the weary Lee Janzen and Parnevik, the Champions Tour newcomer who shot 66.

All have plenty to do to catch Langer on the old-school Donald Ross layout hosting this tournament for the first time. Langer took command by sinking a 40-foot putt on 16 for his sixth birdie. His lone hiccup was a three-putt par from just off the 17th green.

“That German engineering,” Parnevik said of Langer. “He never breaks down. He’s tough to beat at a place like this. He’s so systematic.”

Langer is without a victory this year in which he’s been slowed by injuries. But this week he’s looked much like his 2014 self that won this event and four others.

The 57-year-old Langer is nearing a 24th Champions Tour title. He’d also be the first repeat winner of the Senior Players since Arnold Palmer in 1984-85.

And the wiry Langer’s fitness should help this weekend as the over-50 tour deals with another difficult walking course.

“French Lick was very tough, Des Moines was maybe even harder, and even Shoal Creek is a pretty good walk,” Langer said. “I just see it going into the fitness trailer, the physio truck at the end of the day. A couple guys get treated and they all fall asleep.”

Janzen is perhaps the most in need of a nap. He was the medalist in a 36-hole sectional Monday in Purchase, New York, that earned him a spot in next week’s U.S. Open. He sat at 7 under before a bogey-par-par finish left him at 69.

Without the wind from a day earlier and with the temperature in the 80s, the course yielded a record round.

A couple hours after Brad Faxon bested the previous course mark by a shot with a 64, Pate eclipsed him with a bogey-free, eight-birdie round with his distinctive yellow ball.

It was a relief for Pate, who entered the week with a 72.82 scoring average. He shot 73 Thursday.

Cochran nearly matched him with a seven-birdie round that broke with what’s been a difficult season that’s left him 35th in the Charles Schwab Cup standings.

“Where I am with my game, I felt like I needed a good round,” Cochran said.

Colin Montgomerie, who won last month’s Senior PGA Championship for his third major victory in six starts, shot 71 and was nine shots back.

Even with the daunting task of catching Langer, Parnevik was thrilled to be in the hunt in the 81-player field that had no 36-hole cut. Parnevik turned 50 in March.

“I’ve been so injured the last seven years,” Parnevik said. “I’m so happy the body feels OK and I can play again.”